A heart-breaking end to a tumultuous life 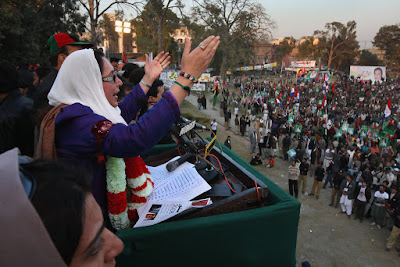 To take part in the 2008 parliamentary elections, former Pakistan Prime Minister Benazir Bhutto returned to the country, from a self-imposed exile in 2007. While campaigning in Rawalpindi she died in a bomb blast

On December 27, 2007, there was a festive spirit on the streets of Rawalpindi. People were waving placards. There were cheers and shouts of ‘Benazir Bhutto Zindabad’ The former Prime Minister was wearing a satiny blue salwar kameez, a white shawl around her head, and two thick flower garlands around her neck.

After a self-imposed exile of eight years, in Dubai and London, while court cases of corruption against her remained pending Benazir had returned to Pakistan to take part in the 2008 national elections.

Benazir was standing and waving to supporters through the sunroof of her bulletproof white Toyota Land Cruiser. John Moore, a Getty Images photographer who was standing nearby said that there were two gunshots and Benazir fell back inside. Very soon after that, there was a bomb blast.

Benazir’s close confidant Sherry Rahman, who was inside the vehicle, says, “I remember the vehicle shaking and the glass splintering.”

An unconscious Benazir was rushed to the Rawalpindi General Hospital. The time: 5.35 p.m. A team of doctors tried to save her. But her injuries were far too grave. And she passed away.
Expectedly, there was a violent reaction.

Supporters destroyed the hospital’s glass doors, vehicles were burnt, stones were thrown on the streets, the police were attacked, traffic was blocked, and billboards of military dictator General Pervez Musharraf was torched.  Soon, the Pakistan Rangers announced shoot-on-sight orders.

At least 47 people died in the riots. Overall, 176 banks, 34 petrol pumps and hundreds of cars and shops were destroyed.

There was a debate about how she died. Her Pakistan People’s Party said she was shot by an unidentified gunman before he detonated the explosives he was wearing. But the Interior Ministry, in a statement, said, ‘Bhutto was killed when she tried to duck back into the vehicle, and the shock waves from the blast knocked her head into a lever attached to the sunroof, fracturing her skull.’ An anonymous Toyota official said Benazir could not have hit the lever based on its location in the car.

Farooq Naik, a senior official of the PPP said the Ministry’s statement was ‘baseless’ and ‘a pack of lies’. Meanwhile, a doctor at the hospital said that Benazir’s medical records were taken away immediately and they were warned not to talk about the killing.

Later, a nine-month investigation by the UN Commission of Inquiry, appointed by Secretary-General Ban Ki-moon at the request of the Pakistani Government, said, “A range of government officials failed profoundly in their efforts first to protect Ms Bhutto and second to investigate with vigour all those responsible for her murder, not only in the execution of the attack but also in its conception, planning and financing.”

Heraldo Munoz, Chile’s Ambassador to the UN and chairman of the commission said, “Responsibility for Ms Bhutto’s security on the day of her assassination rested with the federal government, the government of Punjab and the Rawalpindi district police. None of these entities took necessary measures to respond to the extraordinary, fresh and urgent security risks that they knew she faced.”

The Commission was also unhappy with the investigation in the immediate aftermath of the killing. “The collection of 23 pieces of evidence was inadequate in a case that should have resulted in thousands,” said Munoz. “Hosing down of the crime scene just two hours after the blast goes beyond mere incompetence. It is up to the relevant authorities to determine whether this amounts to criminal responsibility.”

Till now, nobody has been charged with the dastardly killing.

Benazir Bhutto had been Prime Minister of Pakistan twice, from 1988 to 1990, and from 1993 to 1996. She is now regarded as the first woman to lead a democratically elected government in a Muslim majority nation. She was the daughter of Zulfikar Ali Bhutto who became Prime Minister in 1973. However, General Zia ul Haq ousted him in a 1977 military coup and subsequently, Zulfikar was hanged.

Benazir, who had studied at Harvard and Oxford Universities, along with her mother Nusrat, took control of her father’s Pakistan People’s Party (PPP) and launched the Movement for the Restoration of Democracy. She was jailed by Zia and then exiled to London in 1984. She returned in 1986. On August 17, 1988, Zia Ul Haq died in a plane crash. Thereafter, in the 1988 elections, Benazir led the PPP to victory.

As Prime Minister, her attempts at reform were stymied by conservative President Ghulam Ishaq Khan and the powerful military. Her administration was accused of corruption and nepotism and dismissed by Khan in 1990. Thereafter, Nawaz Sharif came to power. When that government was also dismissed in 1993, when Khan dissolved the National Assembly, Benazir led the PPP to victory in the 1993 elections.

During her second term, she advanced privatisation and women’s rights. But there were several controversies: the assassination of her brother Murtaza, and a bribery scandal involving her and her husband Asif Ali Zardari. As a result, President Farooq Leghari dismissed her government in 1996. The PPP lost the 1997 elections and in 1998 Benazir went into self-exile in Dubai.