Talking to the unconscious mind 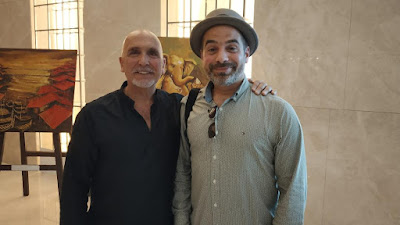 Hypnotists Freddy and Anthony Jacquin talk about ways to cure ailments and mental blocks through the use of hypnosis, while on a recent visit to Kochi
By Shevlin Sebastian
When the 50-year-old Deborah Plumb sat down in the consulting room of the London-based hypnotist Freddy Jacquin, she grimaced in pain. Deborah told Freddy that she suffered from a disease called fibromyalgia. “It means your body becomes incredibly sensitive and painful,” says Freddy, while on a recent visit to Kochi, with his son Anthony. “You can't move. It's agony. Everything is pain. Deborah had this disease for 14 years. Her doctor told her that she wouldn't die from the disease, but she would die with this disease. In other words, she would have it forever.”
To counter the pain Deborah was having 28 painkillers a day.
Freddy said, “Do want to be free of the pain?”
Deborah said, “Of course I do, but the doctor told me I am going to die with it.”
Freddy nodded and said, “I am going to make you free.”
He then hypnotised Deborah and then spoke directly to the subconscious mind, asking it to cure the disease. Amazingly, when Deborah got up from her spell, she found that she was pain-free. And remains so three years later.

Asked the logic of Deborah’s transformation, Freddy says, “All patterns of behaviour are learned, but they end up running automatically. So hypnosis is a way of bypassing the conscious mind and instructing the subconscious. It's not a logical process. You make changes at the subconscious mind. When that happens, the change is often natural.”

Anthony gives an example of what he tells the subconscious mind of smokers. “I will tell it you will no longer experience thoughts or cravings about it. I tell the subconscious to change its beliefs,” he says. “I have cured smoking in just one 90-minute session several times.”
Anthony and Freddy together have seen over 35,000 clients, who have approached them with a varying range of problems. “These include drug addiction, alcoholism, biting nails, scratching the body, pulling hair, and irrational fears,” says Anthony. “Sometimes the fear is a general anxiety, sometimes it's a panic attack. Like Deborah, there are many people who want to overcome chronic pain.”
And there are clients who want to achieve something, “So, they want to change their mental beliefs, get in touch with their inner resources, and also learn how to use these tools themselves,” says Anthony. “In other words, they want to do self-hypnosis.”
To help these people, Anthony has published a book called ‘Reality is Plastic: The Art of Impromptu Hypnosis’ while Freddy has written ‘Hypnotherapy: Methods, Techniques & Philosophies’, both of which are available on Amazon.

As to the question, ‘Who am I’, whether a person is the conscious mind only, Anthony smiles and says, “This is a question that philosophers have been trying to answer for thousands of years, including the Indian philosopher Adi Shankara, whose birthplace I saw in Kalady a few days ago. My guess is we each have an observer which can view the conscious and subconscious mind, but not all can arrive at this higher state. This can be achieved through meditation and other similar methods. Mostly, people are closely aligned with the conscious mind and think that this is the ‘I’.”
Meanwhile, at Kochi, for his show, ‘Insomnia Extended’, along with mentalist Aathi, in front of a sell-out audience at the JT Pac, Anthony tried past-life regression, for the first time, with a group of participants from the audience. One young man, Jaison George (name changed), after being hypnotised, tells Anthony, “I am inside a pyramid.”
“How long ago is this?” says Anthony.
“3000 years,” Jaison says. “I am carrying a case which the Queen has told me to put into another room.”
Jaison pauses, as he seems to look deep into his imagination.
“And?” says Anthony.
“And the Queen is unhappy with me,” says Jaison. “She does not trust me.”
After another pause, Jaison says, “She says I will be put to death.”
The audience gasps in shock and amazement, while Freddy, who is sitting in the second row, claps in appreciation. Anthony makes the participants sing and dance, laugh hysterically and even cry. It was an amazing show, put up by a thorough professional. Says MC Roy, director of JT Pac, “This was one of the best shows ever staged at our centre.”