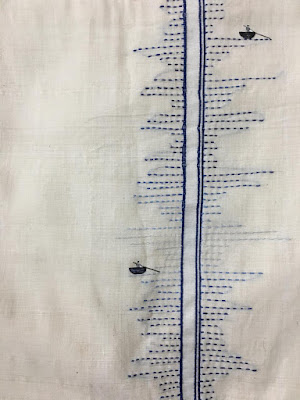 
Among the crafts of India, handloom stands a league apart. It may be the most complex, but the most poetic as well. The real concern on The National Handloom day, on August 7, is to save the art form from extinction by evolving into new forms and designs.

The first in the series is a mapping of the rhythm of the loom. "The back and forth movement of the wooden shuttle laying the weft of the fabric creates a rhythmic sound," says social entrepreneur Lakshmi N Menon. "The form of that sound wave translates for us into a design motif. That is the ‘Heartbeat of the Handloom.’ Heartbeat is the most rhythmic sound expression in any living being. And we just discovered the heartbeat of every fabric made on a loom!

The Heartbeat of Handloom intends to create a new paradigm in design and the process. Heartbeat aspires to redefine the socio-cultural and anthropological aspects through continuous engagement in both theoretical and the practical front.

It is also a design that connects the weaves and the waves of the mega flood of Kerala of 2018. "I want to aspire for a new social fabric by weaving communities together just like the unity and solidarity that we displayed during the harrowing times with the floods," says Lakshmi, who is the lead designer of this project. "The elements of the design include the texture, form, mood, space and the line. The shuttle in the loom resembling the boat is weaving friendship between the weaver and fishermen community."

This collection was part of the ‘Make friendShip’ campaign initiated to express gratitude to the fisherfolks who saved 65000 lives during the floods.