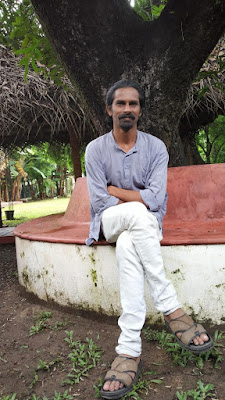 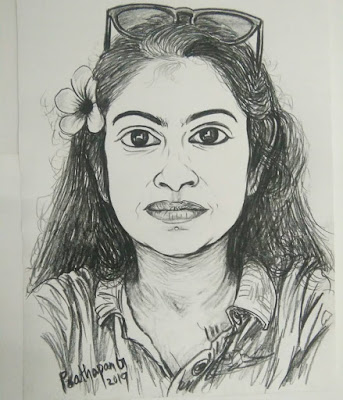 Pics: G. Prathapan; the works at the Kaarisilta Biennale in Finland; pen portrait

On most evenings, G Prathapan cycles down to the David Hall Art Gallery in Fort Kochi, which is less than a kilometre from his home. He is dressed like an artist: a loose shirt, tight trousers, sandals and a satchel across his shoulders. It contains his work materials: micro-tipped pens, and A3 paper.

There are visitors, both foreign and local, who come to see the artworks at the gallery. Later, they hang around at the restaurant in the back. When they are told that Prathapan does caricatures as well as portraits, some opt to sit in front of him.

Prathapan smiles and says, “All of them want me to do it within five minutes. I could, but it won’t be a good job.” Instead, he takes half an hour. Sometimes, it can go up to an hour. By then the subjects are anxious. They scratch their nose, twist their lips to one side, crack a knuckle, roll their eyes, or shake one leg continuously.

The people include a mix of single men and women, sometimes it is a couple, sometimes a family of three, sometimes two female friends, or teenagers, both boys and girls, as well as children. It is in black and white and looks remarkable. Most illustrations seem very alive, as if at any moment they could step out of the paper and become flesh and blood people.

Prathapan smiles when he hears that. “Thank you,” he says simply. There are other reasons for Prathapan to feel happy. He has just participated for the second time as an invited artist at the Kaarisilta Biennale in Finland (June 26-August 4). “Eight of my works were on display,” says Prathapan. Again, these are drawings done in black ink on A3 size paper, all part of a series titled, ‘Trapped Earth by Plastic’.

In one of the images, there is a plastic globe near the bottom of the sea. “Somebody has thrown it away because it was broken,” says Prathapan. “We are now in the throwaway culture. If there is slight damage to anything, we tend to get rid of it. The globe is giving company to the numerous plastic bottles in the rivers, seas and oceans. There is also a plastic packet on the ocean floor.”

In another image, Prathapan has drawn a plastic packet, with just the tip above the surface of the water. “It is like an iceberg,” says the artist. “Only 1/7th of an iceberg is above the surface. The people only see the surface of the oceans. They don’t see what is happening underneath. So they think there is not much pollution. But what I am trying to say is the opposite: there is too much of pollution below the surface. The oceans are a dumping place. We don’t realise that when we throw a plastic packet on the road, it eventually reaches the ocean.”

In another striking drawing, Prathapan has drawn the earth inside a plastic packet. “The whole world is inundated with plastic,” he says. “As a result, none of us can breathe. There is a fish which has got stuck inside a plastic packet. On the seashore, I have drawn a large city, with fumes coming out of the factories. There is pollution in the seas as well as the land.”

In the earlier edition of the Biennale, Prathapan’s topic had remained plastic waste. But at that time, he showed the waste in and around Kochi. “Waste is a topic that I am deeply interested in,” he says. “That’s because environmental damage is the biggest threat facing mankind.”

Says Johanna Immeli, the curator of the Biennale, “The jury was very impressed by Prathapan's drawings. The subject matter of plastic waste is very important. It is a problem all over the world. This appears in the news often. Many visitors liked Prathapan's works. They stood and observed the drawings for a long time. It made them think, they told me later.”

Prathapan passed out with a BFA in painting from the RLV College in Tripunithara. He has been a full-time artist, since 2007, and has participated in state and national solo and group exhibitions over the years. He has won a few state awards.

Prathapan says he would now be focusing on the environmental damage caused by ships and tankers. “When a ship leaks oil as it happened with a Chinese ship, the oil spreads for kilometres together,” he says. “It will damage the sea for a long while.”

He pauses and says, “As an artist, I must bring awareness. The people should awaken and so must our leaders.”