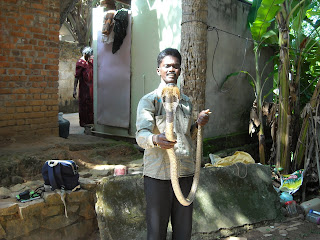 Snake catchers risk their lives every day to do their job, but the public is indifferent to their skills.

In the courtyard of V. Suresh’s house, at Cheruvackal, in Thiruvananthapuram, there are several plastic drums placed side by side, with gunny sacks placed over it. It looks innocuous enough, except when Suresh lifts the gunny sack over one drum. Through a wire-mesh door, you can see numerous hissing cobras. “There are 25 cobras in this drum,” says Suresh, 36, calmly.

He opens the lock, and with an iron rod, which is curved at one end, he prods the snakes. The hissing grows even louder. At this moment, a rat, with terrified eyes, jumps through the entrance. Immediately, Suresh lunges for the rat, but it manages to scamper away.

Suresh pulls out a cobra with the rod and flings it to the ground. With his eyes fixed on the cobra, he closes the door shut. This particular cobra is 10 feet long, and has raised its hood, its tongue darting in and out.

Suresh steps behind, grabs the tail and holds up the snake at some distance from the body. The cobra tries to raise its head, but all Suresh does is to shake the tail and it slides back again.

For a king cobra, he says, it is better to hold the head down with a hook before catching the tail, because it is at least 14 feet long. “For the other snakes, which are five or six feet long, we can hold it first by the tail,” he says.

Last month, Suresh caught 170 snakes. “There were several rat snakes, flying snakes, an 8 ft long krait and 114 cobras, of which 60 were baby cobras,” he says.

Ever since his mobile number was published in a local newspaper and announced on a programme on FM radio, he has been getting calls every day from people from all over the city. As soon as he gets a call, Suresh sets out on his Honda Activa scooter.

“I rush quickly because I am scared the people will try to kill the snake,” he says. After he catches a snake, he brings it home in a sack and stores it in the drums.

“At this moment, I have 45 snakes, the majority of them cobras, while there are some vipers and rat snakes,” he says. He opens a plastic bottle and points at a baby cobra, which has a red wound on its back. “A group of people had tried to kill it and I arrived in the nick of time,” he says. “I am treating it with medicine.”

Meanwhile, he has put rat cages in several houses in the neighbourhood. Every morning, he goes around, collects the rats and feeds it to the snakes. “Once a snake eats a rat, it can survive for 10 weeks without any food.”

At the end of the month, Suresh puts the snakes in sacks and delivers it to the Forest Department whose employees release it in nearby jungles.

Suresh has been doing this job for twenty years and has caught over 10,000 snakes. But, as is usually the case, catching the first snake was the most thrilling.

One day when he was 12 years old, Suresh was walking through a forest in Cheruvackal, when he spotted a rat snake. “I instinctively caught the tail and held up the snake,” he says. He was so excited he did not go to school. Instead, he roamed around the whole day with the snake.

“When I had to return home in the evening, I released it,” he says. “That night, I could not sleep. I was thinking, ‘I caught a snake, I caught a snake.’ After that, whenever I saw a snake, I would catch it.” Today, Suresh, who lives with his parents and sister, is a full-time snake catcher.

But this job has its dangers. Suresh has been bitten four times, three times by cobras and once by a viper. At all times, it happened through carelessness. He had caught a cobra in a suburb of Thiruvananthapuram and put it in the sack. An onlooker wanted to see it. So, he took it out and showed it and then began having a conversation with the man. “I completely forgot about the snake,” he says. Suddenly, it bit him on the wrist. But he remained calm. He took the snake back home, stored it, and went to the Medical College hospital.

At the hospital, he was put on a ventilator and administered an anti-venom injection. “I remained in the hospital for 32 days,” he says. “This is part of the risks involved in this job.”

Byju Kumar, 32, knows a thing or two about risks. This snake catcher works in the reptile house at the Thiruvananthapuram Zoo. “Every day, I feed rat snakes for the king cobras,” he says. When the king cobra is busy eating, he steps inside to clean the cage. “You can imagine how dangerous it is,” he says.

Once, when the cobra was swallowing a rat snake, it spat it out and lunged at Byju who managed to escape and closed the door. “We don’t have any life insurance,” says this father of a baby son. “If a king cobra bites me, since no anti-venom is available in India, I will be dead within a minute.”

And yet, even though his daily wages is low, he continues to risk his life every day. But what galls him is the lack of respect given to snake catchers. “Whenever I am called to catch a snake from a house, the people are near tears,” he says. “But the moment I catch it, they lose interest and make fun of me. When I put the snake in the sack, they want to kill it. Sometimes, I have to give money, so that I can take the snake away.”

Still Byju continues to do the job, because, like Suresh, he loves snakes. “I know snakes look at every animal or human being as either food or foe,” he says. “But somehow, I still love it. I can’t explain the reason why.” Says Suresh: “I love snakes for this reason: God has created it in such a way that it is unable to distinguish between friend and foe.”

But Suresh’s friend, Vishal Kumar, 43, who listens intently, says, “The king cobra has the capacity to distinguish between friend and foe,” he says.

When he was a child, he caught a king cobra and put it in a cage. Vishal would feed it diligently. Finally, his parents pressured him to free it. He went several kilometres away and released it in a forest.

“A few days later, it had found its way back to my house,” he says. “If you have a python as a pet, you can use it as a pillow at night. It will not bite you.”

Vishal has been catching snakes for the past 27 years and has a unique record: he has never been bitten once. “I am very cautious when I approach a snake,” he says. “And thanks to God’s grace, nothing has happened to me till now.”

All of them talk about their fascination with snakes. But it is Suresh, who speaks aloud about the thought that surely crosses the minds of these snake catchers once in a while.

“I know one day I will die of a snake-bite,” he says. “This is my passion and it is going to kill me. I have no doubts about it. But I am not worried about my fate.”

Fast facts about snakes
Cobras and the Russel’s viper kill more than 20,000 people annually in India. Most of the time, cobras, in search of rats, enter houses. If a human accidentally steps on it, the bite proves fatal.

The King Cobra is the world’s largest and most dangerous snake. It can kill an elephant in less than three hours.

A snake’s venom is a mixture of proteins and toxins. When a snake releases the venom, it affects the lungs, the heart, the muscles or the red blood cells. If a serum is not administered on time, death is the result.

Snakes sway to the music of the flute: While playing the flute, the snake charmer moves it from side to side. It is the natural instinct of the snake to closely watch a moving object. Hence, it gives an impression of swaying to the music.
Snakes hypnotise: Snakes stare fixedly because it does not have eyelids and cannot blink.
Snakes guard wealth: This is not true. Old crumbling houses are ideal for snakes, as there are plenty of rats and mice. In ancient days, people buried their wealth and there was a possibility a snake and the hidden wealth were unearthed at the same time, giving this impression.

Snippets
The village of Le Mat in Vietnam serves snake as a delicacy. Several local families are employed as snake catchers to provide an 11-course meal, all made from snake, for visitors and tourists from nearby Hanoi.
----------
On the first Thursday in May every year, the town of Cocullo in Italy celebrates snakes in a big way. What they are actually celebrating is their patron saint, St Dominick.

San Domenico Abate (as he is known locally) lived in the 10th century. He had miraculous healing powers, especially over snakebite.

The Festa Dei Serpari (`serpari' means `snake-catchers') begins with a church service, followed by a procession through the streets of Cocullo.

The serpari capture dozens of snakes in the weeks before the festival. The fangs are removed, and on the day of the festival the serpari cover themselves as well as the saint's statue with the reptiles.