Being gay is not gay at all 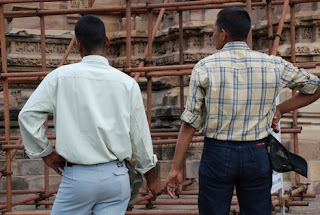 Ranjit fixes up an older man on a train and goes on a rollercoaster ride. A look at his life and troubles

Accountant Ranjit, 25, meets Mohan, 45, while traveling on the Sabari Express.

Mohan, a doctor, is going to Thiruvananthapuram for a conference.

Mohan says, “Do you know of any gays?”

Ranjit replies, “I am one.”

They start talking. Mohan tells Ranjit he is married and has a son. Then he starts crying.

“My wife, the sun in my life, has thrown me out because of my gay tendencies,” he says. “Society is too conventional.”

Ranjit says, “The only way is to get out of Kerala or go abroad.”

Suddenly, Mohan smiles and says, “I want to hug you. Your cheeks are moon-like. Can I enjoy it tonight?”

Ranjit says, “You have a sun in your life, so why are you reaching out for the moon?”

They reach Thirivanathapuram at 7 p.m. and head for a hotel. Mohan does not want to stay at Tampanoor, near the station, because he fears somebody might recognise him. “If people come to know I am gay they will condemn me,” he says.

In the hotel room Ranjit waits for the promised hug, but Mohan says, “Let’s have dinner first.” When they finish eating, Ranjit says, “Let’s start.” But Mohan goes to the balcony to smoke a cigarette.

After a while, he returns and says, “Let the city sleep. Then we will start.” Ranjit gets angry and says, “The city will not sleep. Instead, it will peep.”

They finally make love. But Mohan keeps looking through the window, even though the room is on the third floor. Then he begins to cry. An exasperated Ranjit shouts, “What is wrong with you?”

Mohan shakes his head from side to side and emits a series of low groans.
“I feel so afraid,” he says. “I think I am going to have a nervous breakdown. I cannot live this double life. It is eating into me.”

They try to make love again, but Mohan is too disturbed. They stay awake the whole night. Non-smoker Ranjit watches as Mohan finishes four packets of cigarettes.

“Do you know what my eight-year-old son told me recently,” says Mohan. “‘Papa, please smoke 12 packets a day so that you will die fast’. He hates me. I am sure his mother has brainwashed him.”

Mohan and Ranjit check out of the hotel at 5.30 a.m. and go their separate ways.

Like Mohan, Ranjit is trying to find a way to survive in homophobic Kerala. He discovered he had homosexual tendencies when he was in Class 6.

“I was getting attracted to boys,” he says. “Most of my friends said they found girls exciting. But I did not have any infatuation for the opposite sex.”

“I told him I was desperate to have my first sexual experience,” says Ranjit. “Finally, Prem agrees to sleep with me, but tells me to keep it a secret. We make love for a short while. Then Prem gets up and goes away, feeling disturbed.”

A year later, a frustrated Ranjit begins to make passes at his classmates. They complain to his parents who take him to a psychiatrist. Thereafter, he has several hormonal treatments to alter his orientation, but does not change.

He is also disappointed to discover he has a small penis. “It is only two inches long,” he says. “My testicles are small, and there is hardly any semen.”

His parents spent Rs 5 lakh on the treatments, but have finally given up. “Thank God for that,” says Ranjit.

But like all conventional middle-class parents they are urging him to get married, even though they know he will be unable to father a child. “I don’t want to ruin a girl’s life,” says Ranjit. “I am willing to have a marriage of convenience with a lesbian.”

Marriage or not, Ranjit has been sexually voracious. So far, he has slept with more than 100 men. “The unusual thing is that I have rarely slept with gays,” he says. “The men are usually straight or bisexual.”

He remembers being invited by a film producer to his house. “He took me straight to the bedroom and made love,” he says. “His wife was in the kitchen and I have a feeling she knows about his bisexual orientation.”

Even as he talks, a lover calls on the mobile. “We will meet next week,” says Ranjit. The caller is a senior manager in an IT firm, married, with two children.

“He told me he has a happy life with his family,” says Ranjit. “So, I don’t know why he is crazy about me. He likes to take me out on dates. He talks a lot about his life and enjoys sex with me.”

Despite the good times, being gay has been a torture for Ranjit. “I have to act like a normal person in society when all the time I have sexual desires for men, and I am unable to express it openly,” he says. “There is an emotional and physical toll when you live a secret life.”

Ranjit pauses, wipes away a tear and says, “When will Kerala society accept me?”

(Names have been changed)