In the thick of action 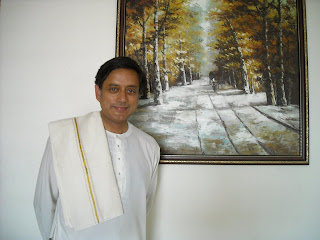 Writing was politician and diplomat Shashi Tharoor’s first love. But a chance meeting with a top UN diplomat changed his life

Shashi Tharoor was only ten years old when his short story, ‘Henry’s Last Battle’ was published in Bharat Jyothi, the Sunday edition of the ‘Free Press Journal’ in Mumbai.

“It was set during the American Civil War,” says the Congress politician and the former UN Under Secretary-General. “A father, a Yankee, and the son, a Confederate go to battle against each other. In the end, the father kills the son.”

When the story was published it was a turning point for Tharoor. “There is nothing more addictive than seeing your name in print,” he says. “You keep wanting to see it again and again. It is like the first kiss.”

However, his parents told him that it was impossible to earn a living in India by writing alone. “They said I had to study hard and do well in my exams and have a conventional career,” says Tharoor, whose parents moved from Mumbai to Kolkata when he was 13.

But as he grew into his late teens it was writing that would provide the opportunities to have a regular career. Virendra Dayal, a senior official in the United Nations High Commission for Refugees (UNHCR) in Geneva happened to be on holiday in Kolkata in 1975.

Prime Minister Indira Gandhi had just declared the Emergency. For the Independence Day issue of ‘The Statesman’, Tharoor had written an article called ‘A sense of belonging’.

“It was a thinly veiled criticism of the feeling of alienation that the Emergency had brought on,” he says. Dayal read the article and was impressed. “He commended it to his relatives around the breakfast table,” says Tharoor. “One of them said, ‘Would you like to meet the author? Shashi and I are acting together in a play.” It was ‘The Mousetrap’ by Agatha Christie.

So Tharoor met Dayal and had a wonderful conversation. “He said I should look him up if I came to New York,” he says. “And the way he said it, I knew he was being sincere.”

Thereafter, in 1978, when Tharoor went to study at the Fletcher School of Law and Diplomacy at Tufts University, USA, on a scholarship, he did meet up with Dayal at New York. The senior diplomat encouraged Tharoor to apply to the UNHCR.

“I did so and I have no doubt that it was Viru’s recommendation that earned me an interview,” he says. “But he was very ethical and scrupulous, and refused to participate in the selection process.” Nevertheless, Tharoor impressed and gained entry into the UNHCR.

“The refugees were leaving in tiny boats from Vietnam and were being rescued by big ships and brought into the port in Singapore,” he says. Tharoor has never forgotten the sight of a family, with two babies, who arrived, barely able to stand on their feet. “They had run out of food and water,” he says. “To enable their children to survive, the parents had made several small nicks on their fingers, so that the babies could suck the blood.”

A few months later Tharoor was able to relocate them to the US and enabled them to begin new lives. “It was an amazing experience,” he says. “Every night when I went to sleep I knew I had made a difference to so many lives. It matured me as a person.”

After 11 years Tharoor was planning to leave when he got a job in peacekeeping in the UN. “When I joined the UN, I intended to work for a couple of years and return to India,” he says.

Instead, he worked for 29 years, reaching the post of Under Secretary General for Communications and Public Information. Along the way, writing on nights and weekends, he has published 11 well-received books of fiction and non-fiction.

In 2006, Tharoor decided to stand for the post of Secretary-General. “It was Asia’s turn,” he says. “I felt that if I did not seek this opportunity another one might not come my way.” Initially, he did receive a lot of support from many Asian countries. However, in the end, he lost to South Korea’s Ban Ki-moon.

Tharoor quit the UN on March 31, 2007. He felt that having contested and lost, it was unworthy to remain. “It meant I had to rethink my life,” he says. He started spending more time in India, became chairman of a Dubai-based business enterprise, Afras Ventures, but when an opportunity arose to join electoral politics, Tharoor took it with both hands. “This has led to a complete re-booting of the operating system,” he says, with a wry grin.

So Tharoor continues in his new avatar as politician. A few weeks from now he will know whether he will represent the people of Thiruvanthapuram in Parliament. If he loses, another fork in the road of life awaits him.