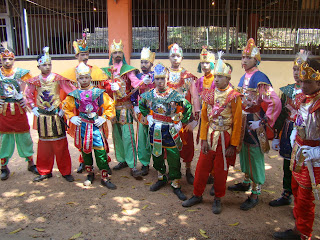 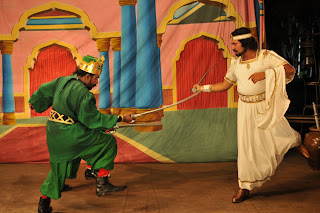 Chavittu Natakam, a 500-year-old dance form of the Christian community in Kerala, is set for a revival, thanks to the tireless efforts of a handful of priests

Mammooty (right) in a scene from the film, 'Kutty Shranku'

On January 30, a Chavittu Natakam troupe from the Nitya Sahaya Matha Church from the Vypeen Islands was performing at the St. Joseph’s church in Ernakulam. “Since we were performing in the city, we did not expect a crowd,” says asan or master Lionel Vennatt Sebastian. “However, the parish priest had distributed leaflets all over the place, and there were a lot of people present.”

At the conclusion of the play, a forty-year-old woman appeared in the green room and shook hands with all the artistes.

“It was my life’s ambition to see a Chavittu Natakam because I had heard so much about it,” she said. “I did not know it was possible to compress a long Biblical story and convey the message so well.”

Says scriptwriter Francis Chammani: “Her reaction was the best moment we had in recent times.”

Not many people know that in Kerala, in response to the Kathakali dance form, the Christian community came up with the Chavittu Natakam in the 16th century.

“Unlike in Kathakali, in Chavittu Natakam the dancers sing and speak aloud and stamp their feet on the stage, accompanied by the beating of drums,” says Fr. Joseph Thattarassery, the parish priest of the Nithya Sahaya Matha church. “There is an influence of Kalaripayattu in the fighting scenes.”

Scriptwriter Francis says that in earlier times the drama was performed on open stages, and even inside the church. “The language spoken is a mix of Tamil and Malayalam,” he says.

Francis says that Chavittu Natakam developed in the coastal areas of Kerala, like Cochin, Alleppey and Kodungallur. The themes are from the lives of Christian saints, the history of Christianity and Biblical themes.

“The costumes have a Portuguese influence and include brocade dresses, headgear and crowns,” says Fr. Thattarassery. “The soldiers wear hats with quills.”

For many years, the Chavittu Natakam dance form fell into disuse. Fr. Thattarassery came across many artistes of the dance form who were languishing in his parish.

“This is one of the cultural riches of the Catholic church and I wanted to revive it in some way,” he says. So, on October 1, 2007, a Chavittu Natakam troupe was set up in the church. And so far, they have given more than a hundred performances in various places.

“In earlier times, the duration of a play was six hours long and a performance lasted right through the night,” says asan Sebastian. “But nowadays, people are rushed for time and so we have reduced the length to one and a half hours. The response has been positive so far.”

On a Sunday afternoon I go across to Kalavoor in Alleppey district. There, another Catholic priest, Fr. V.P. Joseph, is spearheading the revival of Chavittu Natakam in that area. And his reasons are similar to Fr. Thattarassery.

“In my childhood, at Pallithodu, I saw several performances of Chavittu Natakam and enjoyed it,” he says. “Then it began to disappear right in front of my eyes. So, I decided to rejuvenate it.”

Fr. Joseph set up a school for Chavittu Natakam, called the Kreupasanam Chavittu Natakam Academy in 2005. It is a neat series of buildings, besides National Highway 47. There is an auditorium, a small hall for the boys to practice and a museum highlighting the mudras, the costumes and the choreography of Chavittu Natakam. There are five rooms for visiting scholars, a library and a dormitory where more than 50 boys can stay.

Outside, in the quadrangle, a few boys are conversing with each other.

“In the morning there are theory classes, followed by practicals,” says Anoop Lawrence, 17. “I like Chavittu Natakam because of the leg movements. It is an energetic dance form.”

His friend, Hedwin Jose, 19, says, “I want to take it up as a full-time career, but there is not much of an income. So I am in a dilemma about what to do.” Jobin George, 17, says that his parents have told to concentrate on his studies at the same time.

The academy has staged more than 200 shows all over Kerala and in Mumbai also.

“In Mumbai the group performed in front of an audience of one and a half lakhs,” says Fr. Joseph. The priest had also accompanied the troupe on its road show all over Kerala. “The idea was to make people aware of this dance form,” he says. “We also wanted to show that it is simple and easy to learn.”

But Fr. Joseph realised that in order to secure the future of Chavittu Natakam, it would help if it was included as a competitive item in the popular government-sponsored Youth Festivals which take place all over the state. “Then, in order to take part in the competition, schools will have to start teaching Chavittu Natakam.”

The academy gave presentations at the 2008 and 2009 Youth Festivals at Kollam and Thiruvananthapuram respectively. “It was well received,” says Fr. Joseph. Government sources have now indicated that Chavittu Natakam will be included as a competitive item in 2010. To demonstrate its sincerity, the government is now giving a Rs 200 monthly stipend to 29 boys in the academy.

And Fr. Joseph has managed other concessions. After a 17 year campaign, 12 retired asans have also started receiving pensions recently. “They were having financial troubles and I wanted to help them,” he says.

“We enacted the scenes with the help of the asans who work at the Kreupasanam Academy,” says Shaji Karun. “Chavittu Natakam is unique and is perhaps the only Christian dance form in India. Unfortunately, it has become defunct.”

However, Karun feels that when the movie is released during Onam this year, it could revive interest in the dance form. “But we have to wait and see,” he says.

But the priests are not waiting. They are going full steam ahead to ensure that a prized asset of the Catholic church becomes an integral part of the cultural fabric of God’s Own Country.