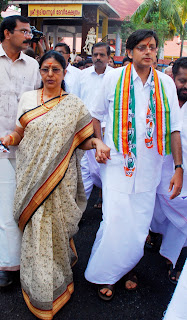 That’s Shashi Tharoor for you today

On April 18, in the court of the Additional Chief Judicial Magistrate A Krishnankutty, at Kochi, former UN Under Secretary-General and Congress politician, Shashi Tharoor sits at the back, in his trademark white kurta and dhoti, waiting for his case of ‘disrespect to the national anthem’ to come up (On December 16, 2008, Tharoor had allegedly interrupted the national anthem after a public lecture at Kochi, but he denies this).

The fan above him is not working, a metaphor for the state of the judiciary. Onlookers crowd the corridor outside, while black-gowned lawyers are present in large numbers inside the court. Tharoor does not look up. He sits motionless and silent.

Suddenly, after a few petty cases have been disposed off, his name is called. He appears in the dock. There is no emotion on his face. His lawyer Ram Kumar gets bail by stating Tharoor will post a personal bond of Rs 10,000 and two solvent sureties for the same.

The next hearing has been posted for July 9.

And Tharoor is on his way out. On the steps, microphones are thrust at him, but restricted by the sub-judice nature of the case he gives a terse sound bite and is gone in a white Scorpio.

It is at his uncle, Shashi Kumar’s eighth-floor apartment at Panampilly Nagar, that the distress becomes very evident. He sits down on the sofa, rubs his hand through his hair, shakes his head from side to side and stares into the distance. His aunt kisses him on the forehead, while his cousin’s wife brings a glass of cool sugarless lime juice. But Tharoor remains silent.

I have met Tharoor on a few occasions, in Mumbai, Kovalam, and at Kochi. I have heard him speak several times on public stages, in one-on-one interviews, and on television from around the world. And he has always been articulate, intelligent and sharp.

But this was the first time I was encountering a Tharoor who is unable to speak. “The court appearance has affectedly him deeply,” says Shashi Kumar. “It is not easy for a law-abiding person to appear in the dock.”

This is what a public interest litigation can to do to one of India’s brightest sons. And Tharoor is learning the hard way that in the hurly burly of Indian politics, anybody from anywhere can throw a stone at you.