A Malayali in Bangkok 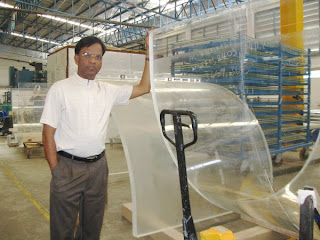 Kalayil Thomas Varghese, who has lived in Thailand for 21 years, talks about his professional and social experiences

Kalayail Thomas Varghese was working as a manager in G. Premjee Limited in Bangkok. One day the operations manager, a Thai by the name of Damri, received a call. His father had died of a heart attack. “He did not show any emotion and I was surprised by this,” says Varghese, 57.

Varghese went to pay a condolence visit to the house. “I was stunned to see that there was a big celebration going on,” he says. “People were laughing, eating, and drinking Scotch whisky and the local drink, Mekong.” The body was embalmed and the coffin was decorated with flowers.

Thai colleagues told him that according to Buddhist beliefs there should be celebrations to send positive vibrations to the soul who has departed. Usually, after seven days of partying and praying the body is cremated. “Thai culture is quite different,” says Varghese.

Born in Changanaserry, Varghese has lived in Thailand for the past 21 years. A first rank holder in rubber technology from the University of Cochin, he began his career in 1976 with the Plantation Corporation of Kerala (PCK).

He worked in Kottayam for 11 years and then felt he was in a rut. “There was no opportunity for career growth,” he says. “My friends, in private companies, had gone higher up in the ladder.”

He applied for jobs in Africa, but got his break with the Bangkok-based G. Premjee and Co, owned by a Gujarati. “Premjee wanted to open a rubber factory in south Thailand,” says Varghese. “He was looking for somebody with experience and thus I was selected.”

Varghese did well and later when Premjee set up a latex, gloves, condom and a rubber-band making factory, the Keralite was involved in the setting up and running of all the units. “I got a lot of experience working there,” he says.

Following Premjee, Varghese worked in an American company called Safeskin, where he set up a latex plant and became the managing director. In 2005, Varghese moved to Reynolds Polymer Technology (RPT) Asia, as regional managing director, looking after Asia Pacific and Europe.

Today, he is one of Thailand’s leading Indian professionals.

So what has been his experience working for American companies? “They are never satisfied with the status quo,” he says. “Change is the motto. In an American company, what is done this month is changed the next month. Thus, they are able to improve their efficiency.”

Interestingly, he says, American employers don’t show any racial bias. “I have never experienced any feeling of inferiority in front of them,” he says. “We call each other by first names. There is no Sir and no hierarchy.”

On the other hand, in Premjee, there was the Indian North-South divide. “People made fun of me because I did not know to speak Hindi,” he says.

Varghese says another plus point of Americans is that they tend to trust their employees. When Varghese was setting up the latex plant, he was able to sign cheques upto 20 million baht (Rs. 2.8 crore) and hire and sack staff.

“I don’t think any Indian company will give that sort of freedom to an employee,” he says.

Roger R Reynolds, the CEO of RPT Asia says, “I have complete trust in Varghese. Ever since he joined our company, we have raised our productivity, improved our quality and increased our profits without sacrificing safety or devaluing the human element.”

Reynolds also admires his subordinate's leadership skills. “Varghese has a good sense of humour to go along with a decisive personality. He makes decisions quickly and gets the employees involved in the decision-making process.”

So, for Varghese, what is the striking difference about Indian companies? “They love the status quo,” he says. “I see the same work systems in place as it was 25 years ago. There is no change whatsoever.”

The second difference is labour problems. “The fun of working in Thailand is that I don’t waste time on labour issues,” he says. “You can sack people and they will not fight with you or indulge in violence.”

In the Plantation Corporation, at that time, there were about 18 unions. “I saw managers spending hours every day trying to sort out problems like suspensions, indiscipline and strikes,” says Varghese.

Incidentally, in Kimberly Clark, a $14 billion company, which took over Safeskin in 1999, there are 7,000 employees and not a single union.

But Varghese, on his annual visit to Kerala, is optimistic. “Things are changing very rapidly here,” he says. “I agree with former President Abdul Kalam that one day India will become an economic superpower.”