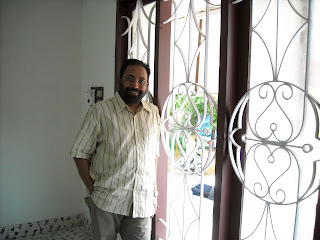 In the film, ‘Swayamvaram’ by Adoor Gopalakrishnan, in the last scene Seeta (played by actress Sharada) is standing behind a closed door in a slum late at night. Her husband, Vishwam, an aspiring writer had just died and Seeta was left with a baby girl to look after. Suddenly, there is a knock.

“When this scene was being shown, I felt that if the film ended here, it would be nice and that was exactly what happened,” says director Sibi Malayil. “The knock signifies the uncertainties in Seeta’s life. I felt a deep identification with the film.”

It engendered a passion for cinema for the young Siby. “Till Swayamvaram, I was just watching films,” he says. “But now I wanted to be part of the film world.” But Siby did not know anybody from the industry.

One evening, in his home town of Alleppey, Siby and his friend, Xavier James, were going towards the Indian Coffee House, discussing films, when another friend, Ignatius Abru, came up and told them, “Jijo (Navodaya Appachan’s son), is searching for new guys to participate in story discussions for films. I have given your names. If you are interested, please come.”

Xavier was not keen, but Siby accepted. “That decision to say yes was a turning point in my life.”

The next day Siby started taking part in story discussions and soon, he was roped in as an assistant director for the film, ‘Mamangam’, directed by Appachan.

In this film, Siby moved from last assistant to first assistant by the time the shooting was nearly over. For the last segment, and for editing and dubbing, Siby was the only assistant director who was asked to go to Chennai.

There, during a tea break, actor G.K. Pillai who was keenly observing Siby at work, called him over and said, “One day you will become a great director.” Siby was astonished. “I had no dreams like this,” he says. “But I was thrilled and excited when Pillai Sir said this.”

In the film, ‘Padayatoom’, the first 70mm to be made in India, and loosely based on the Alexandre Dumas novel, ‘The Count of Monte Cristo’, Siby began working with Jijo. The director told Siby to deal with Prem Nazir, who was playing the hero.

“It was a complicated role,” says Siby. “People were hesitant to ask Nazir Sir for one more take. But I started saying it.”

Siby was also bold enough to offer suggestions and Nazir was deeply impressed. “He started following my directions,” says Siby. “After each shot, even after the director said, ‘Okay’, Nazir Sir would look at me and say, ‘Siby, is it correct?’ It did wonders for my confidence. Nazir Sir was a humble and down-to-earth person.”

Siby left Navodaya in 1983, assisted his friend, Priyadarshan, for a couple of films, before branching out on his own with ‘Mutharamkunnu P.O.’ in 1985. Although it did not do well commercially, the industry sat up and took notice of this new talent.

Siby’s next turning point came when he met the scriptwriter A.K. Lohitadas. One day in Palakkad, the actor Tilakan said, “I know of a good writer who has plenty of ideas. I feel both of you will get along well.”

Siby met Lohitadas who narrated a few stories he had written. “I was impressed,” he says. Since Siby was already working on a film, he told Lohitadas they would work together in future.

Soon, Siby started preliminary work on a film with Mammooty. But he did not like the script. He told the producer Nanda Kumar that Lohitadas might be able to fix it. The duo, who were in Kochi, went in search of the scriptwriter. Siby only knew that Lohitadas stayed in Chalakudi.

Near Chalakudi Siby asked a shop-owner who happened to know the way to Lohitadas’s house. It was dusk. The white Ambassador stopped near a stone on which two men were sitting.

“Through the headlights I realised that one of them was Lohitadas,” says Siby. He was wearing a lungi and was bare-chested.

Lohitadas shouted, “Come on out!” Siby was surprised by his tone. When he stepped out, Lohitadas said, “I am sorry. A friend said he would be coming and I thought it was him.”

Anyway, Siby told him the problem and Lohitadas agreed to come to Kochi at once. They stayed at the Woodlands hotel. When Siby told Lohitadas the story he said he could not do anything to improve it. However, he promised to give another tale.

Lohitadas lay on the bed, staring at the ceiling. He remained like that, till the evening of the next day. Then they went out for a walk and reached the Subhash Park. There, Lohitadas told Siby the new story. The director liked it immediately and this became the superhit, ‘Thaniyavarthanam’.

“It was considered to be Lohitadas’s, Mamooty’s, and my best film,” says Siby.

Thereafter, in partnership with Lohitadas, he had many hits, including ‘Bharatham’, ‘His Highness Abdullah’, and ‘Kireedom’.

Asked to explain his filmmaking philosophy, Siby says, “I like to make movies with values. I want my audience to have new thoughts and experiences, so that they can become better human beings.”