A man of many abilities 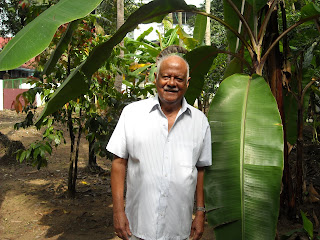 E.P. Antony took part in the first lathi-charge in Cochin State in 1942 when he was only 15 years old. He was also an Air Force officer, a college lecturer, a leader of the Christian community, and conducted a one man-commission investigating bonded labour

On August 8, 1942, when E.P. Antony arrived at the St Albert’s High School, he found the seniors, under the general captain, V.V. Joseph, shouting slogans like ‘Vande Mataram’ and ‘Mahatma Gandhi Ki Jai’.

That afternoon, the students gathered at the Azad Maidan, which is now the Police Commissioner’s office. They were to be addressed by top political leaders like Panampilly Govinda Menon, Chowara Parameswaran, and P.K. Dewar.

As the students waited, they saw the Malabar Special Police blocking one side of the maidan, while the Cochin State Nair Brigade barricaded the other boundary. “The only side that was left open led to the backwaters,” says Antony.

Soon, a magistrate arrived and announced, “In the name of the Maharaja of Cochin State, I hereby command all of you to disperse.” The students shouted back, “We will not do so.”

The next day there were severe consequences for the students. All those who had taken part in the meeting were expelled by the principal, Joseph Manjooran, and told to leave Cochin State.

“At that time, during the second World War, there was a call by Mahatma Gandhi that we should join the British armed forces and strengthen their hands,” says Antony. “If the Nazis triumphed, it would be detrimental to democracy.” So, all the expelled students joined the army, but Antony, who was 15 years old, was too young.

So, he was allowed to stay on in school, provided he gave a written apology and promised to leave the State after he completed his SSLC examinations in 1944.

Antony kept his word. The moment he finished his SSLC exam, he joined the Indian Air Force, at the age of 17, as a wireless operator. Antony went on to have a distinguished career as a radio officer.

He took part in the liberation of Goa from the Portuguese in 1961 and the war against the Chinese in 1962, and flew a total of 3000 hours. He left the Air Force in 1964. (In 2005 he was bestowed with the Lifetime Achievement award by the Air Force).

In the intervening years, he secured a Master’s Degree in history and political science and a doctorate in history from Kerala University. His thesis was the ‘Origin and growth of the Latin Catholics in Kerala’.

He joined St Paul’s college at Kalamaserry in 1964 as a lecturer in political science and taught there for 10 years. But the high point of his life was when he took part in the education stir of 1972.

The Achutha Menon government wanted to take over the private colleges run by the minorities. “We opposed it took and nail,” says Antony. The agitation resulted in the closure of all private schools and colleges for three months.

Finally, Prime Minister Indira Gandhi intervened. She asked the leaders to meet her in Delhi. The group included Antony, Kalathil Velayudhan Nair, the president of the Nair Service Society, and Fr. John Valamattom, the secretary of the Private College Managers’ Association.

During the conversation Indira Gandhi was yawning a lot. Antony said, “Madam, you have yawned seven times. It seems to us that you are not interested in having a discussion. We will go back.”

Indira Gandhi said, “I am sorry, Mr. Antony. Last night I had only 45 minutes of sleep.”

Says Antony: “Her apology revealed what a great person she was.” Eventually, Indira Gandhi told the trio she did not want to offend the Christian community or the minorities. So, the state takeover over the educational institutions did not take place.

Later, Antony became a member of the Public Service Commission and spent three years in Kohima, Nagaland, at the invitation of the Catholic Bishops of North-east India, to establish a resource centre. In 1987, Antony was appointed by the Supreme Court to hold a one-man commission investigating cases of bonded labour in the state.

Today, at the age of 82, he is busy writing his memoirs and is the secretary of the Kerala History Association.

And like all old-timers he is appalled by the politics of today. “Democracy does not mean that you have the license to say anything you want about anybody in public,” he says. “The politicians of today are uncultured. In the newspapers, there are only reports of rape, murder, arson and looting. I am disappointed by the degeneration of society.”