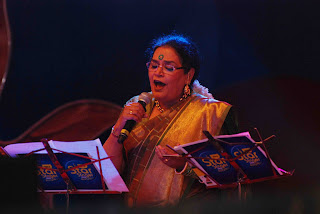 SPIRITUALITY IN THE LIFE OF CELEBRITIES

For singer Usha Uthup, it is to Jesus Christ that she prays often for peace and solace

In July, 2005, singer Usha Uthup was in an elevator in the ‘New Yorker’ hotel in Manhattan when it stopped moving on the 22nd floor.

“I was all alone,” she says. Usha pressed all the buttons for the different floors, but there was no response. Then she tried the emergency button, but it was not working. Frantically, she took out her mobile phone, stood at different corners, before she finally got a signal. She called the receptionist and told her she was stuck.

The receptionist said, “We know.” Usha asked her what had happened.

The receptionist replied, “There’s been a problem, but we are sorting it out.”

“How long will it take?” said a worried Usha.

“I’ll get back to you,” she said, and the phone got disconnected.

In a state of panic, Usha began saying the prayer she uses all the time:

“Our Father,
Who art in heaven,
Hallowed be Thy Name.
Thy Kingdom come,
Thy Will be done,
On earth as it is in Heaven...”

“The ‘Our Father’ is the universal prayer for me,” she says. “It goes beyond every religion, dogma and ritual. This may sound blasphemous for most people, but I could be in a temple, saying my mantras, like everybody else, but in my mind I am always saying the ‘Our Father’.”

When she is on a plane and because she is afraid of flying, she will put on the headphones, switch off the music and sing the ‘Our Father’ quietly. “People usually think that I am listening to some song and humming along,” she says, with a smile.

Usha, of course, is not a Christian. She belongs to a Tamil Brahmin family. When she was growing up in Mumbai, the family celebrated Diwali, Saraswati Puja, Lakshmi Puja, Ganesh Chaturthi and Navaratri Puja. Because she had Muslims as neighbours, she used to keep the Roza (fasting) with her friends Jameela and Shamim.

But Usha says her biggest religious influence came from her school, the Convent of Jesus and Mary.

“I was always going and lighting candles in the grotto,” she says.

And like most students, Usha tried to placate God. “Whenever there was an exam, I would pray to God and say, ‘Tomorrow I will bring five candles or ten candles’, depending on how strong or weak I was in the subject. Usually for English, it was one candle. But for Maths, I would promise twenty candles.”

Candles for God: so how does the famed singer visualise the divine force?

At the dining table in her daughter, Anjali’s home in Fort Kochi, Usha pauses, takes a few sips of coffee, and says, “Jesus Christ is the face I visualise whenever I think of God. I always see him as a handsome and powerful man, in his sixties, and never as a young person, even though Jesus died at the age of 33.”

And, unusually, for an extrovert personality like hers, Usha prays all the time. “When I get up in the morning, I say, ‘Thank you God for everything you have done for me yesterday’. As I say my thanks, I am also saying, ‘Do this for me’ or ‘Do that for me’.”

Meanwhile, inside the New York elevator, it took more than an hour before workmen broke down the side panelling and led her into a parallel elevator. She was taken down on a stretcher.

“When the door opened, the lobby was full of people and when they saw me, they started shouting and clapping,” she says. “Later, I came to know it was a short circuit that led to a small fire which stopped the elevator.”

Asked why God put her through such a traumatic experience, she says, “He gives you these knocks to remind you never to be complacent. God wants you to always remember Him.”