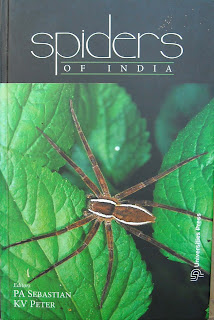 Prof. P.A. Sebastian and his team at Sacred Heart College, Kochi, have published a landmark book on Indian Spiders

When Delhi-based documentary filmmaker Preeti Chadha wanted to make a film on tiger spiders she came to Kochi to seek the help of Prof. P.A. Sebastian, the head of the department of arachnology, Sacred Heart College, Kochi.

One morning a team, which included Sebastian and his colleagues, A.V. Sudhikumar, M.J. Mathew and E. Suneesh, and a two-member camera crew set out for Thenmala in Kollam district.

Accompanied by Adivasi tribals, the group ventured into the forest. “Usually, tiger spiders make tunnels under the ground and stay there,” says Sebastian. Or they stay in holes in tree trunks.

To draw them come out, you need to place a burning cloth near the hole. But even though the group went to many tree trunks, no tiger spider came out.

They dug holes in many areas, but the spiders remained elusive. It was only at dusk that the team finally managed to locate a few tiger spiders underground and the cameramen worked feverishly to capture them on film, before the light faded.

“It was a time of great excitement for us,” says Sebastian, a smile breaking out on his face.

It is not every day that you meet a person who had spent the past 28 years of his life doing research on spiders, but Prof. Sebastian loves his job.

Because of his passion, the Department of Arachnology, the only one of its kind in South India was set up at Sacred Heart College in 1998.

“I have to give thanks to the principal Fr. A.J. Saviance for providing all the facilities,” he says.

“It took eight years of field work and research,” says Sebastian. The last time a similar book was published was 35 years ago. ‘Spiders of India’ provides an in-depth understanding of the animal, including papers on evolution, ecology and biotechnology. The second part focuses on the spiders in India.

“There are more than 1500 varieties in India, while in Kerala, there are 450 different types of species,” says M.J. Mathew.

But the group feels sad about the widespread misconceptions about the animal.

For example, most people believe that all spiders are poisonous. However, those types of spiders are not seen in India. “If a tiger spider bites, there is a slight swelling,” says Mathew.

One reason for the negative mind-set is the physical features of the spider. “Its colour and body design are unattractive,” admits Sebastian. Also, children are told scary tales about spiders. This could be one reason why many people suffer from arachnophobia – the fear of spiders.

Sebastian says there is also a lack of awareness of the benefits of spiders. “In a paddy field, the spider can be the best friend for the farmer,” he says. “The insects get stuck in the web and the spiders eat the pests. This helps reduce the need to apply pesticides.”

And the best part is that the spiders do not feed on the plants.

“The spider is a carnivorous creature and consumes the body fluids of living insects,” says Mathew.

Perhaps the greatest benefit of a spider is its ability to produce silk. Spider silk, which is stronger than steel, is the toughest fibre known to man. This can be used in aircrafts, car racing machines and bulletproof jackets.

Scientists at Nexia Biotechnologies in Quebec have extracted the silk-producing gene from the spider and implanted it in the goat. “The silk is now being extracted from the milk,” says Mathew.

This ‘silk milk’ has been used to produce a web-like material called Biosteel, which is used for tissue repair, the healing of wounds and to make artificial tendons, ligaments and limbs,.

The spider’s venom contains a protein which can be used to prevent atrial fibrillation -- a heart disorder. And it can help patients who have suffered a stroke.

“In Mexico, people eat spiders so that they can get the protein,” says Sebastian.

So, the next time you see a spider blow it a kiss instead of trying to squash it under your foot.