The agony and loneliness of old age 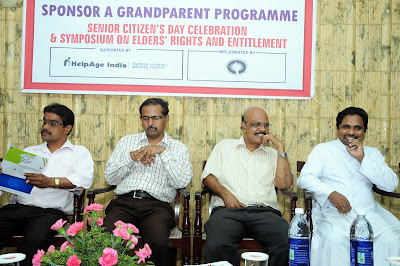 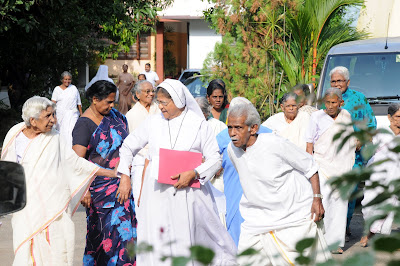 “The numbers of old people are increasing,” says K. Mukundan, District Social Welfare Officer, Ernakulam. “Around 11 per cent [35 lakh] of the population in Kerala is classified as aged. Nowadays, there is nobody to look after them.”

He was speaking at the symposium on ‘Elders rights and their entitlements,’ organized by the House of Providence and Helpage India at the Ernakulam Social Service Society hall at Kochi on October 18. The audience comprised students of Vidyaniketan and St. Teresa’s College and elderly people.

What has aggravated the situation is the rising numbers of women who are working. “They are barely able to look after their own children, let alone, the elders,” says Mukundan. “Having said that, I feel that the women are forgetting their responsibilities towards the aged. People are only thinking of themselves these days. I blame some of the problems on the breakdown of the joint-family system.”

Many old people feel physically isolated and emotionally abandoned. To counter that, the state government is planning to open day care centres where old people can congregate and be busy with activities. “One of them has been just been opened at Nedumbassery,” says Mukundan.

Dr. Martin Patric, retired Professor of Maharaja’s College, says that many populations in the world are ageing, like Japan and France. Kerala is also in the same category. He spoke about how, almost always, the women outlasted the men.

“When the husbands die, the women feel isolated,” says Martin. “Ageing is a gender issue. And as time goes on, there will be more and more old people. And since the birth rate is going down, the number of young people to look after them will be less.”

Martin spoke about the meagre pension that the state government is providing the elderly. “It is only Rs 400 a month, while Tamil Nadu has recently hiked the amount to Rs 1000,” he says. “We should also do the same. There has to be many more Old People’s Homes and the government should be setting up at least one in every district. Aged people also do not have any public spaces that are exclusively reserved for them.”

Roy Chacko, an advocate of the Kerala High Court, spoke about the various provisions in the 2007 Maintenance and Welfare of Parents and Senior Citizen’s act. “The elderly have the right to get maintenance,” he says.

In case an elderly person is not getting it, he can give an application to the Revenue Divisional Officer (RDO), who can arrange to get help from NGO’s who look after the aged, or from the children. “An RDO can get a maximum of Rs 10,000 from the children, depending on their economic status,” says Roy.

If there is a conflict between the children and the parents, this can be resolved with the help of Conciliation Officers. “These officers are supposed to solve the problem amicably,” says Roy.

At this moment, 8.33 per cent of India’s population is aged. “Every five years, this will increase,” he says. “Children should be taught about the necessity of looking after their parents.” The seminar was moderated by Fr. Jaison Vadassery, Director of the Kerala Labour Movement.