Sowing the seeds of growth 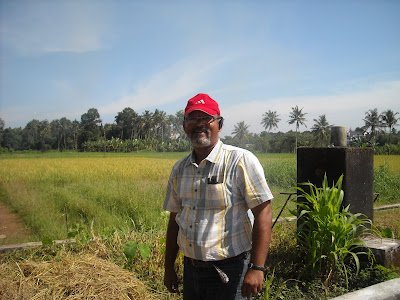 The Kerala State Seed Farm, on an island, at Aluva, near Kochi, produces seeds, at subsidised cost, for farmers. Earlier, it had been a farmer’s school run by the Travancore Royal Family

Just behind the Palace of the Travancore Royal kings at Aluva town, 20 kms from Kochi, there are steps leading towards the Periyar river. Aju John Mathai, an Agriculture Officer, is waiting in a speedboat. The State Seed Farm is on an island 400 metres away. We set out, with the boat leaving large waves behind in its wake.

At the island, an employee, Prasad, is tying white plastic cups to the side of a long wooden stick. Inside are the eggs of micro wasps called tricho-cards. The sticks will be embedded in the mud in the paddy fields. “These eggs will hatch and the wasps will come out, and feed on paddy pests like leaf folder and stem borer,” says Aju. “We are trying to maintain an ecological balance. The pests are there, and we are ensuring that the natural control agents are also present.”

Aju then provides a large cowboy hat and we set out in the afternoon sun to inspect the paddy fields. There are several of them, spread across 14 acres. The farm grows breeder seeds, which are originally collected from the Kerala Agricultural University. After two rounds of cultivation, around 7000 kgs of seeds are sent to the Seed Authority. These are then sold to select farmers, who plant them in their fields. “In effect, 10 kgs of breeder seeds is multiplied till it becomes 50,000 kgs,” says Aju.

At one side, in an open shed, women workers are placing paddy on a threshing machine. The seeds are removed from the chaff efficiently. Karthiyani, one of the women workers, says something to the officer. Aju immediately moves to a bunch of hay piled up on one side, beside a paddy field, and lights it with a cigarette lighter. “The ash will be used as compost for the soil,” he says, as the flames swirl up, thanks to a steady breeze.

At one side there is a vermicompost area, which consists of bins, with wire-mesh tops. Straws, weeds, and banana stems are chopped and put into the bins. “We also sprinkle cow-dung,” says Aju. Lastly, earthworms are added, which will turn it into good manure or compost in 60 days. These are later put in the fields.

“In organic farming, you put back what you take from the field,” says Aju. “A rice plant grows by taking nutrients from the soil. But we only take the grains. The rest of the nutrients are still there in the plant. So I put it back into the soil. There is no need to use chemical fertilisers.”

On the perimeter of the island, vegetables like brinjal, ladies fingers, cowpee, pumpkins, bitter gourd, and fruits like mangos and bananas are grown in abundance. Aju plucks a few ripe bananas from a tree. They are tasty and sweet.

So, what is the importance of the farm? "We are selling the seeds at subsidised rates," says Aju. "Seeds are a multi-crore rupee industry. If you go to the open market, it is very expensive. Farmers prefer to buy from us because they know the seeds are cheap and of good quality. Whatever we produce is sold."

But there is a fear among the 22 workers and administrative staff. On the river banks, there are brand-new multi-storey buildings gleaming in the sunlight. “Yes, the farm faces the danger of extinction because this place is so beautiful, with the river on all sides and all this greenery,” says Aju. “The tourism industry will definitely try to lay their hands on this prime land.” To counter that, Aju has already submitted project plans, to develop farm tourism, worth Rs 2.75 crore, to the Ernakulam district panchayat.

"This place has a lot of history," he says. In 1919, Sri Moolam Thirunal Maharaja of the Travancore Royal Family started a 'Krishi Paadashaala' (Farmers’ school) on the island. This continued for a few decades before the land was taken over by the state government in 1957 and converted into a farm.

“The farm is an asset and should be treated like one,” says Aju.