The road of despair for the Kochi Jews 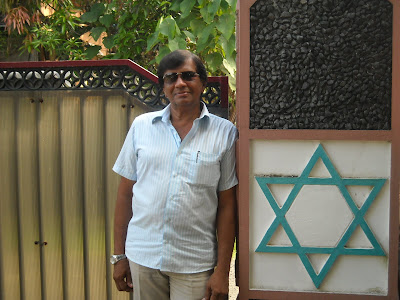 Photo: Josephhai Sam Abraham next to the Star of David symbol at his home in Kochi

The Jews of Kochi are a worried lot. They have a one-acre cemetery, on the Kathrakadavu-Pullepady road. “However, the Cochin Corporation has plans to broaden the road,” says Josephhai Sam Abraham, the president of the Association of Kerala Jews.

According to Jewish religious law, once a person is buried, the grave cannot be disturbed ever again. So the Jews are anxious about whether the authorities will insist that they give up their cemetery. “Many tombs will be disturbed,” says Josephhai. “We are going to appeal to Chief Minister Oommen Chandy to intervene in the matter.” The community is also taking the help of the Israeli consulate in Mumbai and the embassy in Delhi.

Meanwhile, Saumini Jain, the chairperson of the Works Standing Committee of the Cochin Corporation, says, “We respect the religious feelings of the Jewish community, but we also have to consider the needs of the wider public. The enlargement of the road is vital for a smooth traffic flow, and it will benefit the entire city of Kochi.”

Another source of anxiety for the Jews is the misconception that the community is down to nine people. “This is not true,” says a member, Babu Elias. “In fact, the nine people are the Mattancherry Jews. And they are all indeed in their seventies and eighties.” But there is also a small, thriving Jewish community of about 40 people who stay in Kochi, Aluva, and North Paravur.

“There are young couples who have small children,” says Babu. Most of the youngsters are computer engineers, doctors, marketing and IT professionals.

The state government has allotted one seat in medicine and engineering in every alternative year to the Jewish community. “This will be very helpful for us,” says Josephhai. “But since the perception is that we are only a handful, there is a danger of the quota being withdrawn. In reality, we have eight youngsters, all below twenty years of age.”

What is of pride for the community is that they have not asked for any other help from the state government. “By the grace of God, all of us are doing well,” says Josephhai, a businessman.

Meanwhile, the new generation has the option of staying or migrating to Israel. “This is an individual decision and we will never interfere with it,” says Josephhai. Incidentally, Josephhai lived for 14 years in Jerusalem, before he returned to Kochi in 1986. “I missed Kerala and India,” he says.

On the other hand, his son, Solomon, 29, has migrated to Israel with his wife, Susan, a Bene Israeli Jew from Mumbai one year ago. “I accepted their decision gracefully, and they are happy there, although I am sure they will miss India also,” says Josephhai.