A message for the people 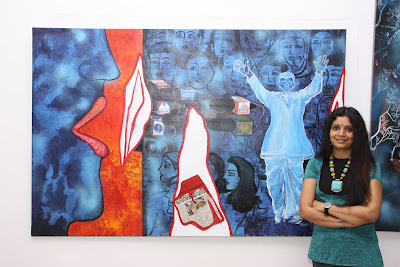 Photo: Bindi Rajagopal next to the Anna Hazare painting

Every night, at 10 p.m. Bindi Rajagopal sets up her easel at her home in Thevara. The children have gone to sleep, their class homework and dinner over, while her day's work as an art teacher in a private school has ended. Then she slowly begins to paint. “I need pin-drop silence to work,” she says.

In recent times, she had been much affected by the Anna Hazare phenomenon and the bomb blasts in Delhi. “I wanted to do some paintings that would say something to the people,” she says.

Not surprisingly, her latest exhibition is called, 'Of the people, by the people, for the people'. However, at the gallery, the first thing that catches the eye is a piece of installation art. On an aluminium ladder, there are paper figures of men trying to clamber up the steps.

At the top, sitting with one leg placed on top of another, and watching the others, with a smug expression, is a young politician who has won the big prize. “This resembles the ladder of power,” says Bindi. “Everybody is keen on grabbing political power these days. Film stars, celebrities, anybody who has a public profile, has an interest in politics. I wanted to show this mad scramble for power.”

Just beside it on the wall is an acrylic on canvas. On one side, there is the familiar white kurta-dhoti figure of Anna Hazare, wearing a white Gandhi cap, and with upraised hands, as if exhorting the crowds to join him in his anti-corruption fight. Behind him there are eager-looking faces, young and middle-aged, hoping for a corruption-free India, but feeling skeptical at the same time.

On the left is an elongated face, with thick open lips, painted a deep red. Television mikes in the middle are capturing all the sound bites. Just below is a Malayalam newspaper clipping which has been pasted on to the canvas.

“The media is the biggest influence in society now,” says Bindi. “Anna Hazare's message was spread far and wide thanks to the television channels, newspapers, and magazines.”

Besides the Hazare painting, there is another acrylic on canvas of a cow or a goat having a woman’s head in a forest. The face looks much like Bindi’s: thick, red lips, deep, black eyes and flowing shoulder-length hair. A calf is suckling away, at the nipples. It seems an unusual juxtaposition to the anti-corruption drawing, till Bindi says, “It is too late to change adults. But if mothers can breast-feed principles of fair play and honesty to children, we can hope to get a society with good people in the future.”

Other paintings include one on a forest, where there are trees, painted in black, with flowing leafless branches, on the top, that looks like the many arms of Goddess Durga, and all done in a serene blue. Interestingly, Bindi has spray painted it on a corrugated sheet. So, at the centre, there is a fold, as if the painting had been bent. “It might have got damaged during the transit to the gallery,” she says.

The aim of the painting is to tell people that they need to stop and think. “There are no silent areas in a city,” she says. “We have to go and find a place where there is space and quiet, so that we can spend time in contemplation. A lack of serenity creates many problems in society.”

Another painting is of Mahatma Gandhi, with his rimmed spectacles and long walking stick doing the famous march to Dandi in March, 1930, from Sabarmati Ashram, to protest the salt tax imposed by the British. There is an Indian flag in the background and Gandhi is being earnestly followed by patriotic men and women.

“This shows the link from Gandhiji to Anna Hazare,” says Bindi. “Both are fighting for truth. They are struggling on behalf of the people.”

On the floor, she has placed several small paintings of banana shoots, flowers, leaves and stems. “People are so disturbed and tense these days, they have no time to enjoy nature,” she says. “They walk past it without noticing anything. They don't know how to enjoy and appreciate life any more.”

One who viewed the exhibition was Sidharthan, a senior faculty at the RLV College of Music and Fine Arts, Tripunithara. “This exhibition reflects an artist’s reaction to political and social issues,” he says. “Bindi is having a steady growth because she is working continuously. I am sure she is going to get better in future.”