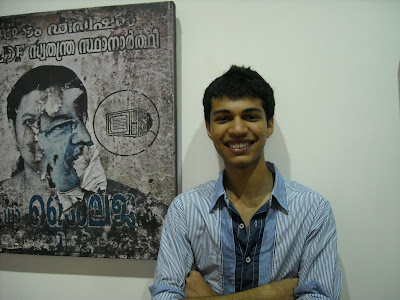 Two years ago, Nihaal Faizal was walking beside the railway tracks, near the South bridge, at Kochi, a Canon EOS 550D camera slung on his shoulders, when he saw a torn poster on a wall and got an idea: why not take photographs of political posters that are littered on numerous walls across the state? More than a thousand photos later, he has short-listed 20 posters for an exhibition at the David Hall, Fort Kochi, called, ‘More Automobiles Than Are Parkable’.

“Politics has played a major part in the life of the people in Kerala, the first state in the world to elect a Communist Party to power,” says the Class 12 student at Choice School. And in these posters, what is intriguing is that most of them have been torn. Sometimes, the eyes cannot be seen or the chin, nose, ears, and the head.

“It is out of boredom that people tear the posters,” says Nihaal. “They are waiting for a bus and they see a poster on the wall and rip a part of it off. Maybe, they are feeling frustrated and angry because they are jobless. When the economy is down, it is possible that more posters might be torn.”

Psychiatrist Binu Balan gives another perspective: “Many people have grown up in an environment where they have seen their elders tear posters,” he says. “That is why the mutilation of posters has persisted for so many generations.”

Interestingly, the posters that are ripped off have grim, unsmiling expressions. “The eyes are glaring at us, like 'Big Brother' [in George Orwell's novel, '1984']. Some people might get irritated by that,” says Nihaal. “You don’t want to be stared at all the time. You want some moments of privacy.” On the other hand, the posters which have escaped unscathed have smiling faces on it.

One of the most unusual posters is that of Meherunnissa Kalluparambil, who stood for the Cochin Corporation elections. Her face has been carefully cut out, almost as if somebody has used a blade to do the job. What remains is the black burqa. “Now the person does not exist, only the community,” says Nihaal. Beneath the poster, he has put up a saying by Mahatma Gandhi: 'An eye for an eye will make the whole world blind'.

Saumini Jain, the chairperson of the Works Standing Committee of the Cochin Corporation has barely survived on a poster. Right below her lips is another poster advertising the Spoken English classes run by the Anglo British Council at Ravipuram. Meanwhile, on the doors of a broken-down white Ambassador car, parked by the side of the road, two posters of Congress candidate A.R. Kannan have been pasted.

On another poster, a rope is seen hanging in front of a poster of a woman's face. Nihaal has titled it, using an African proverb: 'When elephants fight, it is the grass that suffers.'

“Elephants are politicians and the grass is the common people,” he says. “Their battles affect us. We see their faces everywhere. They are self-serving and self-centred. They don’t care about the people. They are doing things for their own benefit. The question uppermost in my mind in the past two years is this: 'where are the faces of the ordinary people?'”