Everything natural about it 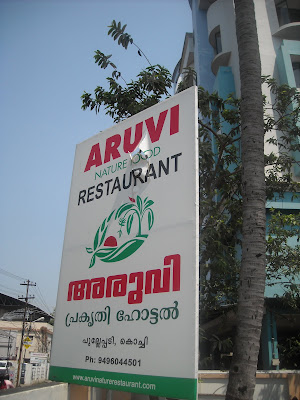 The Aruvi Nature Food restaurant avoids oil, masalas, and artificial preservatives. Patrons are pleased with the food they eat

Just before you enter Aruvi Nature Food Restaurant at Iyattinmukku, off Chitoor Road, Kochi, a board catches your attention. Some points: 'Artificial colours, essence, preservatives, ajinamoto which causes illness are avoided. We also avoid red chillies, sugar, maida, tea, coffee, fried items, and pickles. We serve “jappy”, instead of tea and coffee.'

At lunchtime, there is a reasonable crowd present. And the meal begins with a glass of carrot juice. This is followed by a plate, which has a mound of very dark brown rice. “This is raw rice,” says Aruvi owner Jacob Vaddakancherri. “We have not removed the bran or the husk. Boiled rice is unhealthy because the bran which helps in digestion has been removed. Eating this type of rice taxes the pancreas, and weakens it in the long run.”

Thereafter, a plate with four mounds of vegetables is brought. One contains peas and pumpkin. Then there is avial, beans, strips of carrot and cucumber, and a coconut chutney. “We place a lot of emphasis on green vegetables like ash gourd, papaya, and snake gourd,” says Jacob. Apart from that, there is sambhar with brinjals, carrots, and tomatoes. A container with rasam is also placed on the table. At the end, a glass of payasam is given. The meal costs Rs 50.

Of course, no oil or preservatives have been used. “When you put artificial colours, it forms toxins in the body,” says Jacob. “Sometimes, it also causes constipation, piles, irritable bowel syndrome, as well as liver cancer.”

Because of the lack of masala and oil, the taste is different. “You have to get used to it,” says regular patron, M.Y. Shajan, an accountant. “The food here is more reliable, as compared to other hotels. And the best part is the light feeling in the stomach after having a meal.”

Says Jacob: “This type of food is digestive-friendly and enables you to have easy morning ablutions.”

A. Rajesh, who is the company secretary of Muthoot Finance, is also a fan. “The food makes me feel good in terms of health,” he says. “I experience a rise in energy levels. Oil and masala have an aggressive impact on the body.”

Meanwhile, Jacob propagates avoiding sugar, tea, and coffee. “These cause irritation in the mucosa of the stomach walls,” he says. Instead, he proposes having 'jappy', a drink which consists of coriander, dried ginger, fenugreek and cumin seeds. “Jappy neutralises the toxicity inside the body and is good for fighting diabetes,” says Jacob.

And as for the fear that the food will be the same day after day, he says that they make changes in the menu from time to time. “For starters, we provide beetroot, carrot and the juices of other vegetables, on various days,” he says. “We also make changes in the main course, as well as the payasam.”

The cook does not heat the food twice. So, it is always fresh food that the patrons are eating. And the reason is simple: “Reheating spoils the food and causes toxins to be formed,” says Jacob.

So, for a pure, nature-rich meal, step into the Aruvi restaurant.