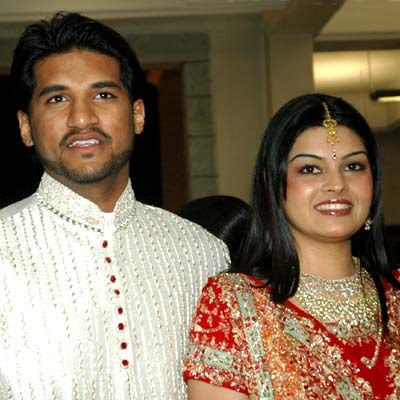 When singer Vijay Yesudas met Darshana for the first time he immediately fell in love. Darshana recounts the experience

On February 14, 2002, Darshana Yesudas was backstage at a music concert in Dubai. She had been asked by a family friend, Mala, who was the organiser, that she should light the inaugural lamp, along with playback singer K.J. Yesudas. There, she was introduced to Vijay Yesudas and they began chatting immediately.

The next day, Darshana went to Mala’s house, where Vijay was present. “He told me that he had a dream where we would meet again,” says Darshana. “So when he actually saw me, he got very excited.” Darshana was wearing a white top and blue jeans. “How old are you?” he said. Darshana replied that she was 16. Vijay stared thoughtfully at her.

Vijay was supposed to leave that night, but missed the flight. “He called me the next day at 5 a.m. and said that he had reached India,” says Darshana. “I was thinking, 'So why are you calling me?' Then he said, 'Actually I am in town. So why don’t we meet?'”

When they met, Vijay astonished Darshana by saying, “I don’t want to first fall in love and then ask the permission of our parents. So, I will straightaway tell my mom and you go tell your parents and we will start off in the right way. Maybe you are not in love with me and I may not be with you but we will see where this relationship goes. Right now I am in the shadow of my father. So I need to create my own name. So give me that space too.”

Darshana, not surprisingly, got zapped. “I was thinking, ‘What should I go and tell my mom?'”

Nevertheless, she told her all what had happened. For Darshana's mom, Tara, it was history repeating itself. “My dad, Balagopal, met my mom when she was 16 and he was 22,” says Darshana. Balagopal immediately told Tara, “Let’s go and tell your parents about this. So that they know about what is happening.” But when it came to Darshana, Balagopal told her to wait five years, till she had finished her graduation. “My father said that would be enough time to know Vijay properly,” says Darshana. “Then we will think about marriage.”

And nearly five years later, on January 21, 2007, Darshana and Vijay tied the knot. So, after half a decade of marriage, what sort of a person is Vijay? “He is a loving and giving person,” says Darshana “Vijay is very emotional, like any artiste, and has his own mind. He does not keep any resentment in his heart. He is open and will bluntly say things, but I like that. ”

Vijay shares some traits with his mother. “Most of us think we have limitations, but for Vijay and my mother-in-law, they think anything is possible in life and will move forward accordingly.”

But the one drawback about Vijay is that, like his father, he loses his temper quickly. “But the good thing is that just, as quickly, he cools down,” says Darshana.

Meanwhile, because of Vijay, Darshana is learning to live in the spotlight. “I am trying to get used to people staring at us when we step out in public,” she says. “For Vijay, he has been accustomed to it since his childhood and knows how to deal with it, just like our three-year-old daughter, Ameya.”

But, when she travels with Vijay, she has interesting experiences. “Recently, Vijay had a show in Wayanad and the audience went berserk,” says Darshana. “I love people in north Kerala because they let out their emotions. In Kochi, people become formal. In Thiruvananthapuram, they are inwardly tight. They are worried about the fact that if they come up to talk, whether they will get snubbed.”

Before Ameya was born, Darshana would attend all her husband’s shows. “I feel a sense of pride and happiness when I see Vijay on stage,” she says. “He is a bundle of energy. Vijay is the happiest then and is completely natural. It is the same Vijay I see at home.”

At the lobby of the Holiday Inn in Kochi, both share an easy camaraderie and affection, as they pose for photographs. When asked for advice on relationships, Darshana says, “Trust, trust, and more trust. More than love, it is trust in a relationship that gets you through. Love is always there. Before marriage, it is a crush, later, it becomes an understanding. And when I see my in-laws now, it is a divine love.”