‘There are so many sides to success’ 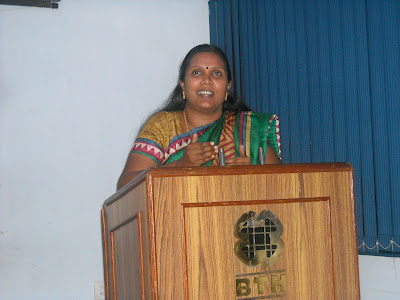 M. Beena, the MD of the Vytilla Mobility Hub, talks about the meaning of success, and the joys of an administrative career at a speech at the Wednesday Club

“When I took charge as Ernakulam District Collector [2008-11], one of the first questions that people asked me was I felt to be the first lady Collector,” says M. Beena, the Managing Director of the Vytilla Mobility Hub. “I was not prepared for such a question because I never felt that being a woman is a limiting factor. In our family we are two sisters. The differentiation between boys and girls was not there. My parents never said, ‘You are a girl, so you are not supposed to do this or that’. So that concept never entered my mind.”

Beena was talking at the Wednesday Club, Kochi, a forum that helps develop leadership and communication skills. “So I was taken aback by the question of being the first Lady Collector,” she says. “A profession is about people, rather than gender. There are good male as well as female officers. Ultimately, dealing with your professional challenges is more of a personal, rather than a gender attribute.”

Nevertheless, being a woman helps. “When labour unions leaders would come to the office, they would tell each other, ‘Madam has to leave on time in the evenings. She has two children to look after. So let us not take too much time.’ So the problems -- very tough issues -- would be settled over a cup of coffee. Both sides would be determined to solve the problem.”

When asked whether she is successful, Beena says, “I really don’t have an answer to that, because there are so many sides to success. Regarding my academics, you can give me ten out of ten: I was a rank-holder in my SSLC, pre-degree, engineering, medical, and civil service examinations. You could give me high marks for my career. But sometimes, I say, ‘Am I successful as a mother?’ and then I have to give myself minus points. Right now, as I am talking to you, at 8 p.m., my children are waiting for me. So, it is about pluses and minuses. There is never a perfect kind of life, especially when you are a woman, and have to balance so many different roles. But I try to make the best out of it.”

When pressed to talk about one of her successful projects -- the land acquisition programme for the Vallarpadom International Container Terminal project -- Beena recounts an incident. “After taking charge, as Collector, within a month, in May, 2008, I lost my mother,” she says. While the ceremonies were going on, at Thiruvananthapuram, a senior government official dropped in, paid his condolences, and said, “Please don't forget the Vallarpadom project, because it is at a very critical stage.”

When Beena returned to Kochi, she held a meeting with the evictees. “I called them, along with their families, and had frank discussions,” she says. “A friendly approach helped a lot.” By August 5, the land had been acquired, and the project could go ahead.

Beena further elaborated on the definition of success. “I might not be successful in terms of bank balances and other assets,” she says. “I don’t even have a two-wheeler in my name. But I love my job and it has given me so much of happiness and enjoyment. When people come to meet me at 6 p.m., they expect to see a tired person. Instead, they find me brimming with energy and enthusiasm for the simple reason that I am passionate about my work. So, one definition of success is to be in a job that you love. And that makes you feel successful every day.”