The green green grass of home 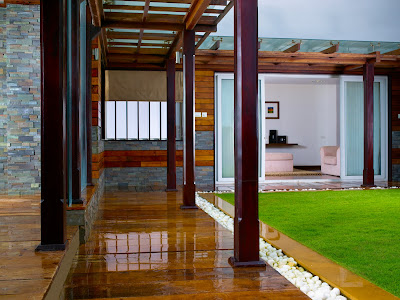 The Mathers, one of Kerala's top builders, recreated gardens in their penthouse apartment for their children to enjoy

Raffi Mather, one of Kerala’s most well-known builders, wanted to build a villa in the heart of Kochi, but it was beyond him. “Even for a builder, a small area would cost Rs 22 crore and that is too expensive,” he says. “Ultimately, we opted for an apartment for two reasons: one is for security. I travel a lot. Secondly, I needed a place which is close to my children’s school and my wife’s place of work.”

Reshma Mather is an English literature lecturer at St. Teresa’s College, while their two daughters study in Choice school. And so it was that the Mathers ended up staying in a custom-built 14th floor penthouse apartment, measuring 5500 sq. ft., in posh Panampilly Nagar.

The door is nondescript, like any other apartment. But when you step in through the foyer, you are immediately confronted by a living room which is about 30 ft in height. There are 20 ft. high curtains and drapes.

The curtains have been bought from ‘Atmosphere’ in Dubai and is operable with the use of a remote control device. “Once every few months, employees from Dubai will come to see that everything is all right,” says Reshma. She plans to change the drapes, because it has been torn thanks to strong winds.

Meanwhile, what catches the eye is a pair of pistols placed in a tray on a low wooden table. So, are these to be used when guests get on your nerves? Reshma laughs, and says, “These are replicas of the pistols used by King Louis XVI. We bought it at the Versailles Palace in Paris.”

The floor is made of rustic wood. “We wanted a place where people can come in freely and go,” says Reshma. “We did not want guests to get awed and take off their slippers. Marble is something that both of us don’t like, because of the extreme shine.”

On the ceiling of the dining room, there are a row of lights, but it gives off a muted look, suggesting an air of intimacy. There are bedrooms on either side, with large glass-paned windows, apart from a sitting area with sofas placed in front of a television set.

Near the dining room is a pantry, with the obligatory microwave with a hood, an oven, and a large refrigerator. And beyond that is a verandah with a table and chairs. “This is where my two daughters and I have breakfast,” says Reshma. “Raffi joins in, when he is in town.”

The view is simply stunning: a vast expanse of sky when you look upwards, and downwards, so many coconut trees, interspersed with buildings and roads.

Then it is up gleaming wooden stairs to the next floor. And then comes the piece de resistance of the Mather house: two 500 sq. ft. gardens, separated by a wall. The gardens have thick grass and plants growing wildly on the perimeter.

“The idea of the gardens was to get in more air into the house and make it look bigger,” says Reshma. “Both Raffi and I love greens and lived in houses which had large compounds. We wanted the children to have the feeling of being in a house and in touch with the grass.”

Just beside one garden is a dining area, again made of wood, but with a translucent glass roof. “At night, it is beautiful to stare at the moon and the stars,” says Raffi. “Our children hold their parties here.”

Next to that is a large home theatre, superbly sound-proofed, with red leather recliners and sofas, as well as a white screen placed against one wall. “We see a lot of films during the monsoons, as it is too much of a bother to travel anywhere, what with the slush and the traffic,” says Reshma.

However, for Raffi, the monsoon is the best time of the year. “Since we have a 360 degree view from the apartment, we can see the clouds appearing from a distance and then the rain falls in torrents,” he says. “It is wonderful to look at. Kerala is God’s Own Country.”