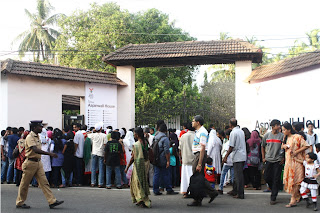 Impressions of the ongoing Kochi-Muziris Biennale

After coming from chilly , Chris Dercon, the director of the Tate Gallery of Modern Art Gallery in , is enjoying the hot sunshine in the garden of a hotel at . But there is also pain on his face. “Ever since the economic crisis of 2008, Europeans have lost their self-confidence,” he says. “They find it so difficult to make decisions. And women are discussing whether to have children or not. What is going to happen?”

The unthinkable is happening. After 500 years of world domination, the decline of Europe has begun, as Asia, and , begins to shake and stir.

One highly successful Mumbai-based architect, Raghav Kothari (name changed), got so excited by the buzz about the Kochi Biennale, that he came on a visit recently. And as has been the case with all visitors, he was overwhelmed by what he saw. Later, Raghav sat with one of the organizers of the cash-strapped Kochi Biennale Foundation (KBF) and said, “My parents were poor. I came up the hard way and have become very successful. But now I want to give back to society.” The end result: the architect gave a Rs 10 lakh donation and became a Patron of the KBF.

Ordinary people have also been patronising the Biennale, in large numbers, even though the tickets are priced at Rs 50 for adults and Rs 10 for students. “We have earned Rs 2 lakh one day,” says Shwetal Patel of the KBF. “Isn’t that great?”

As an art aficionado talks about the wonders of the Biennale, he flings a nearly finished cigarette on the ground. A man standing nearby, picks it up, puts it in a dust bin, and says, “Please practice ecological tourism.” Or, in other words, please come down to earth, instead of floating high on the rhetoric of art.

Just before he gets into an auto at the ferry at  to see the Biennale sites, a man says, “Brother, I am a local. Please don’t charge me Biennale rates.” The driver smiles, and says, “Will spare you Sir, but do remember this is the season we make the money for the entire year.”
Not unexpectedly the Biennale has a lot of foreign women in varying stages of undress, thanks to the bright sunshine. So they are wearing short shorts, mini skirts and tight jeans. An 11-year-old daughter tells her father, “Papa, why are you staring? And that too, with your mouth open.” Message to dads everywhere: ogle only when children are not around.

Malayali wit is not far away. At one exhibit, if you pour spices on a lid, music will spring forth. One man told another, “Is it possible that if we pour spices on our wife’s head, she will dance to our tunes.”

A member of the Kochi Biennale Foundation says, “There are negative opinions about us. But no issues, this is a democracy and it is messy, and there will be people saying all sorts of things. But we refuse to get into the ring and give back as good as we get. We are higher than that. But I do know that the majority of the people like the Biennale and I am sure their voices will carry the day.” Well said!

One artist says, “The ones who are making the most noise against the Biennale are those whose works have not been selected. It is the sound of jealousy. Hell hath no fury than an artist scorned!” Oh William Shakespeare, sorry, William Congreve [English playwright, 1670-1729], what will we do without such apt phrases!

One artist, who is not recognised by the crowd, stands at one side of his exhibit and keenly watches the reactions of the audience. “This is the beauty of art,” he says. “We can know the effect that we create, or the lack of it. You writers cannot have that pleasure. You can’t see your readers.” True, and, perhaps, a blessing in disguise.

The Pepper House gives some options to visitors. On the first floor, there is no railing. Instead, there is a white ribbon tied from one end to the other. If you feel like committing suicide, lift up the ribbon and jump down. If life is happy, enjoy watching the ribbon swaying in the breeze.

(A shorter version appeared in The New Indian Express, Kochi)