The artist and his muse 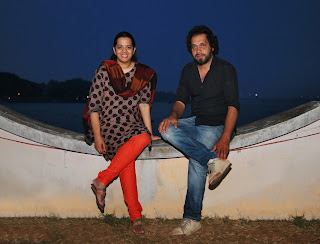 Zoya met Riyas Komu when they were both in the same class at the Sir JJ School of Art in Mumbai in the 1990s. “What I noticed immediately was that he had a zest and an infectious energy,” says Zoya. “Since he was from Kerala, there was an element of rawness – a kind of innocence – about him, unlike most of my other classmates.”

They were drawn to each other, because of their mutual interest in world cinema. “We attended a lot of film festivals together, and admired the films of Mohsen Makhmalbaf and Andrei Tarkovsky,” she says.

And they gradually fell in love even though they belonged to different backgrounds. Zoya's parents are from Uttar Pradesh, but they have been settled in Mumbai for a long time, while Riyas is the son of politician MM Komu in Thrissur.

The fact that Zoya did not know Malayalam was not a hindrance for Riyas. Whenever he would come across an interesting article in a Malayalam magazine, he would translate it so that Zoya could also enjoy it. “Thanks to Riyas, I have read [Vaikom Mohammed] Basheer in an English translation,” says Zoya. “He is one of my favourite authors. I loved 'Poovan Banana (Poovanpazham)'.”

The couple got married on April 7, 2001. And for their honeymoon, they came to visit Riya's large family, of seven brothers and two sisters, at Thrissur. “I am an only child, so it was an interesting experience to become part of a large family,” she says. “The language and culture were so different. You are into and still not into the family. Sometimes, it was difficult to comprehend things, but at the same time, it was quite engaging.”

What ensured Zoya's assimilation was because she loved Riyas intensely. “He is not obsessed about art only,” she says. “Riyas has an open mind and is interested in all subjects, be it football, theatre, films, literature, and about people and happenings in his village and the world.”

And unusually, for a Malayali, Riyas gives Zoya the mental and physical space to be herself. “Riyas wants me to have my own views and feel free,” she says. “That is the case with the people who work with him. As a result, everybody feels at ease with Riyas.”

In Mumbai, on an ordinary day, Riyas gets up at 8 a.m. Following breakfast, he goes to his studio: it could be the one where his sculpting works are done, or his painting studio, both of which are in the suburb of Dahisar. “If he starts work on a painting, he will spend hours on it, and continues labouring on it through the night,” says Zoya. “That is how he likes to work.”

Of course, an artist leads a different life, as compared to a banker or a businessman. “Every day is fluid,” says Zoya. “You have discipline, but you don’t have rigidity. The advantage is that you can do whatever you like, but there are different responsibilities, as compared to a person working in an office. You have to manage your own life.”

In effect, Riyas is the star of his own show. “But the only time he feels pressure is when there is a show coming up, and the works are not ready,” says Zoya.

Not surprisingly, Zoya has a few favourites, among Riyas' works. One of them, which was displayed at the 2007 Venice Biennale, is a set of paintings called, 'Petro Angel'. This was inspired by the plight of Iranian women, as shown in the film, 'The Circle' (2000). “He has been able to portray the different emotions of women very well,” says Zoya.

Riyas, himself, has gone through an emotional roller-coaster because he, along with Bose Krishnamchari, struggled to set up the landmark art event, the Kochi-Muziris Biennale. “He was asked to take the responsibility, and did so,” says Zoya. “Riyas knew that it was important not only for him or Kerala, but for establishing an art culture in India.”

Incidentally, because of Riyas's preoccupation with the Biennale, Zoya has moved to Kochi with their four-year-old daughter Mariyam. “I am happy to be here and am proud of what Riyas has achieved,” she says.