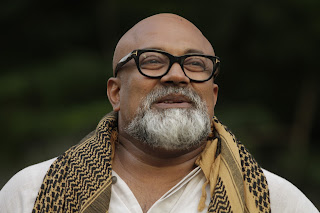 Vivek Vilasini’s photograph, ‘Last Supper-Gaza’, has been a worldwide hit, and sold for Rs 20 lakh. It can be seen at the Kochi-Muziris Biennale

One day, in 2008, Malayali artist Vivek Vilasini called up his friend, the Palestinian poet, Yousuf Ahmed (name changed) in Dubai. Yousuf was in a sad mood. “He told me that he is a Palestinian artist, with a Jordanian passport, and living in Dubai,” says Vivek. “And nobody gives them a proper space. He said, 'You guys are lucky. So much is happening in India.'”

It set Vivek thinking. He was touched by the plight of Yousuf and began to ponder about the life of the Palestinians. “They were second-class citizens in their own country,” he says. “They lacked freedom. And, because of constant wars, a lot of the men were killed and the women had to bear the brunt.” By coincidence, at that time, Bose Krishnamachari, one of India's well-known artists, was the curator for the India section at the Arco international art fair in Madrid in 2009 and had asked Vivek to contribute.

Suddenly, a brainwave occurred. ‘The Last Supper’ of Jesus Christ, made famous by the iconic painting by Leonardo Da Vinci, actually took place, not far from Gaza. That was when he decided to take an unusual photograph.

The Kochi-based Vivek went to the Srishti School of Art, Design, and Technology in Bangalore where he was once a visiting faculty. He asked for volunteers and 13 first-year girls stepped forward. All of them wore burqas and face veils, and stood behind a long narrow table with a white tablecloth. On the table there were steel plates which had loaves of bread and red pomegranates. The background was painted in charcoal black.

The women were busy talking and looking at each other. “I shot the image using a 45 mega pixel camera, with a wide-angle lens, apart from 13 lights,” says Vivek. It ended up becoming a large photograph, 12' x 4 ½'. The title: ‘Last Supper-Gaza’.

On the day it was displayed in Madrid, on February 10, 2009, Israel attacked Gaza. Associated Press photographer Paul White took a picture, showing two Spanish women intently studying Vivek’s photograph, and sent it through the wires of the international agency. More than 100 newspapers worldwide published the photo. Eventually, it was put up for auction at Christie’s, London, and bought by a Palestinian from Dubai at a price of Rs 20 lakh.

It was also displayed at a cathedral in Santiago De Compostela, Spain. Later, it was shown at the Atopia show in Barcelona in 2010. And this same photograph is now on display at Aspinwall House, during the Kochi Muziris Biennale. This is the first time the work is on public display in India. According to sources, it is the most photographed photo in the biennale. “It is a high point for me,” says Vivek.

But Vivek’s life had not been a high point for years. After he completed a three-year course as a Marine Radio Officer at the All-India Marine College in Kochi, he spent a couple of years in an ashram in Mayapur in 1984. Thereafter, he decided to do a degree in political science, but opted out because it was not interesting. Then he got a job in Delhi and was there for a few years. From there, like most Malayali youngsters, he went to Dubai and worked there for some years, before he returned to India. Now he divides his time between Bangalore and Kochi. But all along, he was doing various types of art, like painting, video, digital projections, sculpture and photography.

But today, Vivek has made a mark, especially in photography. One notable photographic series was about the houses in Kerala painted in so many vibrant colours. “This reflects the rising prosperity and the self-confidence among the people,” he says.

The artist is fascinated by his home state. “Kerala is just a narrow strip of land,” he says. “For centuries people have been coming to the state from all over the world for trade purposes. And all along, Malayalis have been absorbing new ideas, internalising it, and making it their own.”

So, the people have accepted Christianity, Islam, Communism, modernity and fresh concepts in literature, music, and the arts. “It is an intellectual absorption,” says Vivek. “Nobody had to fight and pressurise us to accept them.”

In fact, one of Vivek’s first works was of photos of locals, with names like Lenin, Stalin, Marx, Che Guevara, and Ho Chi Minh. “This is an extraordinary form of identity construction,” he says. “And I have spent my career trying to understand it.”