What a wonderful voice! 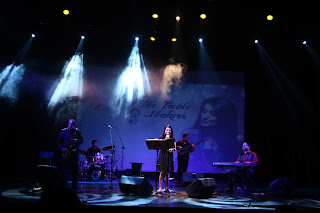 The song has simple but touching lyrics:

I see trees of green,
Red roses too,
I see them bloom
For me and for you
And I think to myself
What a wonderful world.

I see skies of blue
Clouds of white
Bright blessed days
Dark sacred nights
And I think to myself
What a wonderful world.

There is an instrumental solo lasting a couple of minutes in the song, and ‘Treble Makers’ band member Antony Quadros lets it fly on the saxophone. And Sonam turns sideways, looks at him, and mouths the word, 'Beautiful'.

Yes, beautiful it was, one of the great hits of Armstrong, released in 1967, which gained renewed worldwide popularity when it was used as the soundtrack of the 1987 film, 'Good Morning, Vietnam'.

Sonam’s next song was a 1940 Spanish song called ‘Besame Mucho ('Kiss me a lot'), written by Mexican songwriter Consuelo Velazquez. It is a song about kissing a boy but, interestingly, Consuelo wrote the song even though she had never kissed anybody at that time. It was an era where kissing was regarded as a sin.

But Sonam’s concert was no sin. In fact, it was a delightful mix of jazz, melodies and evergreen hits. They included Bob Dylan's 'Blowing in the wind', Eric Clapton's ‘Tears in Heaven’, and what Sonam called the most amazing Sufi song in the world: 'Imagine' by John Lennon. For these songs, she was accompanied by Anuj Bhatia, a corporate lawyer by day and a guitarist by night. Other hits included Frank Sinatra’s ‘Cheek to Cheek', ‘Somewhere over the Rainbow' from the ‘Wizard of Oz’, and ‘Summertime’ from the 1935 opera, 'Porgy and Bess'.

This desire to express feelings through songs was instilled by her mother, Aneeta. “She made me sit on her lap and listen to songs by Begum Akhtar,” says Sonam. When Sonam exhibited a vocal talent, Aneeta Kalra ensured that she received proper training.

Later, Sonam would train under Hindustani classical music singers Shubha Mudgal and Sarathi Chatterjee in India and from gospel singer Ashley Clement in Singapore. She had been a TV anchor as well as into advertising before she took the plunge to be a full-time musician in 2000. “It was a conscious decision,” she says. And Sonam’s aim was clear from the beginning: “I wanted to find peace through my music and make my mother proud of me.”

Today, Sonam has sung in numerous concerts all over India, and in Johannesburg, Toronto and Muscat. And one of the most memorable moments occurred at the conclusion of a concert in Delhi, when a woman walked up to the edge of the stage, and said, “My dear this is straight from your lips to God’s heart.” Sonam was overwhelmed by what the lady said. “If I am able to touch the audience, it means that they have felt my truth and understood what I have been trying to say,” she says.

And the Kochi audience was equally moved. “I received quite a few appreciative e-mails” says Sonam. One was from Roy George (name changed) “Congratulations for the wonderful concert,” he wrote. “Keep going on, and God will continue to bless you.”

Sonam had been worried about her Kochi performance. “It was my first time here and nobody had heard of me,” she says. On stage, she has a low-key style. Wearing a knee-length black dress, she stood at one place behind the lectern and sang with a crystal-clear and resonant voice.

The band included Alex Fernandes on the keyboard, Brennon Denfer on upright bass, Anthony Quadros on the saxophone, and Joshua Grant on the drums.

For most, especially those who are steeped in Western music, it was a Saturday evening well-spent.