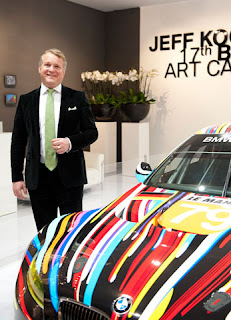 One-and-a-half years ago, when Dr. Thomas Girst, Head of Cultural Engagement, BMW Group, was at the Venice Biennale, he received a proposal to be a partner of the Kochi Biennale. “We were interested from the beginning,” says Thomas. “As you know, BMW has opened a plant in Chennai in 2007. Whereever we are, the company has a policy of being active within the community. We do this through social and cultural programmes. The Kochi Biennale seemed to be right project where the company could share a common passion for the arts.”

There is another reason for the company's involvement. “The way people look at brands has changed,” says Thomas. “It is no longer about cars but about the behaviour of the company in society. So, the arts are an important way for BMW to foster a good image.”

Asked about the possible monetary benefit to the company, Thomas laughs, and says, “This is more about our reputation, rather than about selling cars. That is what the showrooms and dealerships are for.”

Nevertheless, the company has achieved a spectacular growth in India. In 2011, BMW sold 9371 cars, up 50 per cent from the year before. It has annual worldwide revenues of 68 billion euros, from sales in 140 countries, and a one lakh workforce.

In Kochi, Jose Dominic, the managing director of the CGH Earth Group, is also a partner of the Biennale. “We are providing accommodation, hosting get-togethers of artistes, and have provided venues like the David Hall and the Rose Tree Bungalow to showcase the works. People will realise that the CGH brand is associated with culture and art, and that we have a certain personality. So, it is an indirect enhancement of our image.”

And this motive is confirmed by Shwetal Patel, Executive Officer of the Kochi-Muziris Biennale: “Corporates look for brand enhancement by sponsoring culture in general. There is an opportunity to reach an audience in a subtle manner. It is about soft power, values, ethics, and creativity. A corporate gets a sort of halo that art gives.”

And it could also be a boost to the economy. “Where there is art, it indicates an increased quality of life,” says Jose. “This sends a signal that it is a place worth living, and a place to invest in. In other words, art can be a driver of the economy.”

And it can also be a driver of tourism. “Thanks to the Biennale, cultural tourism is going to be the next big thing in Kerala,” says Johny Abraham, of Intersight, a Kochi-based travel and tour company. “We will now be able to showcase our great Kerala heritage.”

Cultural tourists, as the name implies, are those who travel to places to see the local art and culture. Today, they account for 37 per cent of world travel, according to the World Tourism Organisation.

“Cultural tourists have the disposable income to buy quality art works,” says Riyas Komu, the secretary of the Kochi Biennale Foundation. “When they stay in hotels they will pay service tax, which will generate income for the state government. A new economic model, based on art tourism, can be set up.”