Of shadows and puppets 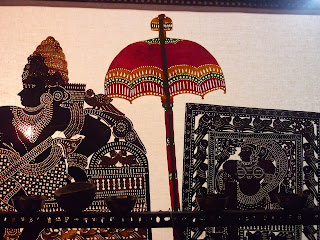 About 20 minutes before the start of a performance of Tolpavakoothu (shadow puppetry), at the JT Pac, Kochi, recently, veteran artist K. Viswanatha Pulavar starts looking at his watch. He has done over 5000 performances, but each event is new and different. Like the true artist, who wants to do his best, Viswanatha has butterflies in his stomach.
His family, consisting of his wife, a son and daughter, are also moving around, on the stage, placing the puppets in the right place. The other participants are changing into white moondus.

“We usually perform in temples,” says Viswanatha. “So this is a new experience to perform in front of city folk.” He pauses and says, “Do you think a lot of people will come?” And he answers the question himself, “I doubt it. The audience for all types of traditional art forms are shrinking.”
Viswanatha looks sombre and continues, “People don’t have the time. They are more keen to chase money and do not want to waste time on the arts. But it is through the arts you can become aware of what is good and bad. Now people are losing the fear of God and do what they want. That is why there are so many murders and crimes in Kerala.”

Realising that the audience may have no idea about what the art form is all about, Viswanatha says, “Tholpakoothu is 2000 years old. It is performed in temples dedicated to Bhagawathy Devi in the districts of Palakkad, Thrissur and Mallappuram . There is a 40 feet long stage called a koothumadam [temple theatre].”

Traditionally, a performance begins at 10 p.m. and concludes at 5 a.m. “By then, there will only be two people present,” says Viswanatha. “We perform during the season of January to May.”

Of course, there is a myth behind how this art form came into being. The Goddess Bhadrakali had defeated the Asura, Dharika, after a hard battle. Just at that very moment, Rama had defeated the ten-headed Ravana.

When Bhadrakali, holding the head of Dharika, met Lord Siva, he told her about the great battle of Rama. Bhadrakali had a great desire to relive the war of Rama. So Shiva said, “Go to the blessed land of Kerala. There, you can witness the epic event through shadow puppet plays.”

At the JT Pac, when the curtain rises, there is a smaller white and black curtain with a bouquet of leaves in the middle. “The white curtain represents the sky, while the black is a reminder of the earth,” says Vishwanath. And then the programme, based on the Tamil poet Kamba's version of the Ramayana, begins. The filigreed puppets appear on the screen. They fight, they fall off. Sometimes, they hold hands. At other times, they tell angry dialogues at each other. Arrows move across. An opponent is felled.

There is a fight between Jatayu and Ravana; another conflict  between Bali and Sugreeva. In between, birds are flying, while an elephant rumbles across, apart from rabbits, squirrels and a deer. There is a sound of a tree falling. Lord Hanuman comes along, apart from Lord Rama, and Sita. And on and on, the characters come and go.

“In today's performance, we used 200 puppets,” says Viswanatha. These puppets are made of goat or buffalo skin. First, the hairs are removed, and then the skin is dried. Thereafter, the outline of the character is drawn. Then it is cut out and painted with vegetable colours.
“Sometimes, when I enact a role, I feel the same emotions that the character is going through,” says Viswanatha. Interestingly, the language spoken is a mix of Tamil, Sanskrit and Malayalam. And the instruments used are traditional ones: drums, cymbals and gongs.

Behind the screen, on a straight line are placed 21 lamps. And the performers, about 10 in total, stand behind the lamps and move the puppets, in an extraordinary display of skill, co-ordination, understanding, and dexterous use of the hands, and always moving the story forward without a pause.

“It takes years of practice,” says Vishwanath. “I started learning at the feet of my father, [the late] Krishnankutty Pulavar more than forty years ago,” he says. “Our family has been doing this for ten generations.”

And Viswanatha practises diligently. “In the off season, from June to December, we perform every evening for two hours at our home in Koonathara [near Shoranur],” he says. “That is the only way we can ensure that we are performing well all the time.”

And audience member Pallavi Abraham agrees. “It was my first time and I enjoyed it a lot,” she says. “The puppets looked perfect. I especially liked the singing. And my husband, who knows Tamil, enjoyed the dialogues a lot.”

But even if the audience enjoyed the performance, the income for the Pulavars is not much. So, in order to make ends meet, Viswanatha works as a postmaster. “I get a lot of support from the postal superintendent and other seniors,” he says. “And I get peace of mind because this is something I love to do.”