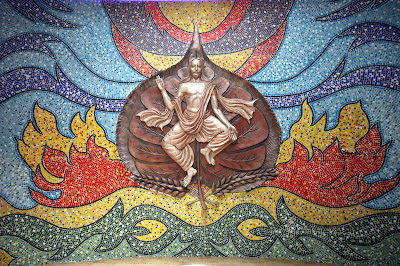 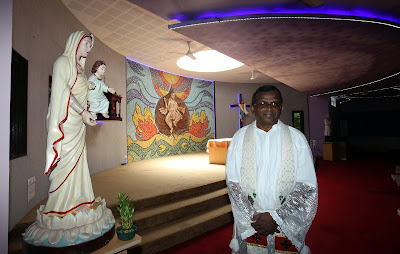 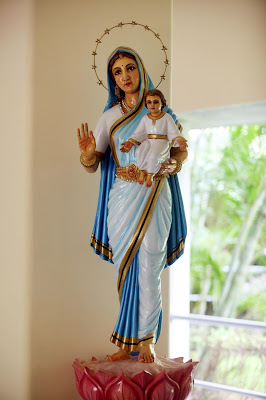 At the Jnana-Deepa Vidyapeeth at Pune, the images of Mother Mary and Jesus Christ have been made to look Indian

Photos: The large mural behind the altar; Fr. Alex Gnanapragasam, the treasurer of the Jnana Deepa Vidyapeeth; Mother Mary in a Maharastrian saree

Near the entrance of the post-graduate block of the Jnana-Deepa Vidyapeeth, a Christian Institute for Philosophy and Religions, at Pune, a surprise awaits the visitor. There is a statue of Mother Mary holding the Baby Jesus, but with a difference. She is draped in a sky-blue Indian saree, with a gold border.

“This is a Maharastrian saree,” says Fr. Alex Gnanapragasam, the treasurer of the Vidyapeeth, which is run by the Society of Jesus. There is another innovation: Mary is standing on an open lotus. “The lotus is India’s national flower,” says Fr. Alex. “We wanted to combine the elements of Christianity and Hinduism, so that God can be better understood through one’s culture.”

Another statue, in the chapel, is of Mary wearing a Bengali-style pastel saree.

However, inside the chapel, what catches the eye is the large mural behind the altar. “Jesus is shown in the traditional Lasya dance of creation,” says Fr. (Prof) Dr. Noel Sheth, a Sanskrit scholar as well an Indologist, who is well-versed in several Indian religions. “The right hand is shown in the vyakhana mudra, the sign of teaching. And the left hand is in the dana mudra – the gesture of giving grace. The two ears of wheat at the bottom of the pipal (sacred fig) tree represent the Bread of Life and the Word of God.”

The other elements include green vegetation which indicates the earth; above it are waves of water. The light blue currents refer to the invisible air. “The red flames represent the fire,” says Fr. Alex. “The circular yellow patch above the tip of the leaf points to ether, which cannot be seen or touched or felt.”

Jesus is shown leaning against a pipal leaf. The pipal tree has always been known as a place where one goes to meditate. “In fact, Buddha achieved enlightenment while meditating under a pipal tree,” says Fr. Sheth. “This tree is sacred for Hindus as well as Buddhists.”
Interestingly, the person who made the mural is a Kolkata-based Hindu by the name of Subrata Ganguly who runs a firm called Church Art. “Art has no religion,” he says. “I have been involved with the work inside churches for the past 25 years.”

For the Vidyapeeth mural, it was his mother Gita Ganguly who drew the initial designs. “She is well versed in all religions,” says Ganguly.

The mural, which is 8 feet in height and 16 feet in width, is made of coloured ceramic chips. It was originally made in the firm's workshop in Kolkata and then transported in smaller parts by train to Pune. Thereafter, it was reassembled and mounted.

“I have done similar work in other places,” says Ganguly. “At a seminary, at Barapani, near Shillong, Meghalaya, there is a mural of Jesus standing under a pine tree surrounded by people in Khasi and Garo headgear. Jesus is also portrayed as a Bhil tribal. We did this after an extensive research on the Bhils.”

In a church, at Ambapara, Rajasthan, there are scenes from the Bible on stained glass on the windows in the style of Indian art. “At the St. Xavier's College guesthouse chapel in Kolkata, Jesus is portrayed in a sitting position reminiscent of the Lord Buddha,” says Ganguly.

In fact, the the original name of the Jnana Deepa Vidyapeeth was the Pontifical Athenaeum. “We changed it in 1972,” says Fr. Alex.

Meanwhile, the reaction to the Pune images has been positive. “Everybody, whether it be lay people, priests or nuns have expressed their appreciation,” says Fr. Alex. “There is a desire among some of the faithful to Indianise the religion. But this is taking place more in rural areas, than in the well-established older churches in the cities.”