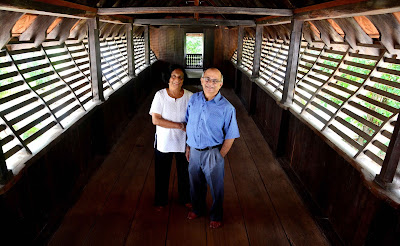 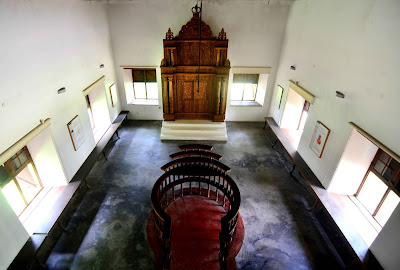 The 900-year-old Paravur Synagogue, near Kochi, has been restored to its original best

Photos: Samson Pallivathukal and his wife, Miriam Artzi; the inside of the synagogue. Pics by Ratheesh Sundaram

On a sunny August morning, a smile breaks out on the face of Samson Pallivathukal, 68, as he approaches the gleaming-white Paravur synagogue, with his wife Miriam Artzi. “Look, how nice it looks,” says Samson, who left Paravur for Israel in 1973, but is back for a visit. “There was a time when everything was broken and weeds grew all over the place.”

Yes, but all that changed when, in 2009, the Kerala government's archaeology department took possession of the synagogue, which is 32 kms from Kochi, and placed it as part of the Muziris Heritage Project. The restoration work was entrusted to conservation architect Benny Kuriakose and his team.

And today, everything is spick and span. From the entrance, Samson leads the way through tiled pathways and doors to the prayer hall at the back. Samson looks at the receptacle or the Ark, placed against a wall, and says, “The Torah, which used to be placed inside the ark, as well as the ark, have been taken to Israel in 1995,” says Samson.

Today, the ark is an exhibit at the Jerusalem Museum. To recreate it, Benny sent an e-mail to the museum authorities. They sent four high-resolution photos. “Based on that, a colleague of mine, Clerine Patteri, worked painstakingly for three months to recreate the ark,” says Benny. Apart from that, the floors, steps, ceilings, roof and the Bema, which is the platform from where the Torah is read,  have been restored to their original best.

What is unusual about the 900-year-old Paravur synagogue is that there is a separate set of steps which leads to the first floor. This was where the women prayed, while the men remained in the ground floor.

“On the Sabbath, one prayer was conducted on the ground floor,” says Samson's wife, Artzi. “The other one was said on the balcony so that the women can hear it.” The priest took a flight of steps, at one corner of the hall.

Another unusual feature is the large open courtyard in front of the synagogue. “This is an unique feature of Kerala synagogues,” says Samson. “There were also numerous lamps and chandeliers, which cost lakhs of rupees.”

Unfortunately, all the chandeliers and lamps have gone missing. “The building had been abandoned,” says Benny. “The doors and windows were broken. A thief came one night and took away all the chandeliers. But we have plans to restore all of them.”

Till that happens, when you look upwards, all you can see are the metal hooks on the wooden ceiling which were used to hold the chandeliers. But all around, on the walls, there are plaques which detail the history of the Jews in Kerala, as well as touchscreens which tell the story of the synagogue. So far, Rs 2 crore has been spent for the conservation works.

Meanwhile, what holds pride of place, near the entrance, is a replica of the copper plate, listing privileges, which was given by the King of Cochin, Bhaskara Ravi Varma, to the Jewish leader Joseph Rabban in 1000 AD. “Yes, the King welcomed us,” says Artzi, with a wide smile. “Many Jews were escaping persecution in places like Persia. And Kerala was one of the few places on earth which welcomed the Jews.”

Overall, there is an innate charm to the synagogue. Tourist Aleesha Matara feels peaceful and serene. “This is a beautiful space, and represents the rich inter-religious nature of Kerala's society,” says Aleesha. Adds Innat, an Indian-origin Jew, who lives in Israel: “To see the synagogue where my father and grandfather prayed is very exciting.”

Today, there are only two Jews living in North Paravur. All the rest have left. There are no prayers being conducted in the synagogue, because, according to Jewish custom, you need a minimum of ten Jews to conduct the service. “Once upon a time, there were more than a thousand Jews in Paravur,” says Samson, with a sad smile.