The Charm Of Being Short 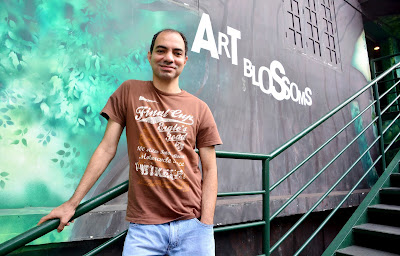 In 2009, Cyrus Dastur, the Mumbai-based founder of the Shamiana Short Film Club, had gone to Kolkata. He was showcasing a few short films at the Nandan theatre. After the show was over, a group of college students came up and had a chat with Cyrus.

Two years later, one of the girls, Shivani Parekh (name changed), called Cyrus and told her that when she had attended the screening, she had been studying science. But, inspired by the films she saw, Shivani began to study film-making.

“It was a life-changing moment for Shivani,” says Cyrus. “That was when I realised that Shamiana was having an impact on people.”

Cyrus, a long-time theatre actor, started the club on June 7, 2008. His logic was simple. “For feature films, there are cinema halls, TV channels, and film festivals where you can see them,” says Cyrus. “But for short films there is practically no outlet, except for a few film societies, which are few and far between. So I decided to set up a platform where short film-makers can showcase their works, in front of a discerning audience.”

When Cyrus set out, he also had a stroke of luck. There was a simultaneous growth of the social media. So when people saw the films and liked it, they mentioned it on Facebook. “And that helped in spreading the name of the club,” he says.

Asked the meaning of the word, 'Shamiana', Cyrus says, “When I was a child, my parents would take me to the Shamiana coffee shop at the Taj Mahal Palace,” he says. “That is how the name got stuck in my mind. Shamiana also means a tent. In the 18th century, people would go from village to village, set up a shamiana, and show films.”

Today, there are clubs in places like Kochi, Baroda, Pune, Bangalore, Ahmedabad, Chennai, Delhi, Kolkata, and Chandigarh, as well as Hongkong, Singapore and Melbourne. “In fact, we have a worldwide following of four million,” says Cyrus.

Interestingly, there are no membership fees. Instead, the club depends on sponsors. Apart from halls, the films are shown at restaurants and cafes. “These venues are given free to the club because they get more business thanks to increased footfalls,” says Cyrus.

A wide variety of films from all over the world, including Oscar-nominated ones, are shown. One of the recent films, which made an impact, was 'Baghdad Messi', made by the Belgium-based director Sahim Omar Kalifa.

It is about a ten-year-old boy, Hamoudi, who has lost a leg. A fan of the footballer, Lionel Messi, Hamoudi has a passion to play football with a local club in Baghdad. “The 19-minute film shows how violence has not curbed the Iraqi children’s passion for the game,” says Cyrus.

Asked about the benefits of showing a film at the club, Cyrus says, “A film-maker is able to physically meet with members of the audience, and get a feedback. This helps him or her to become a better film-maker.”

Recently, Cyrus held a short film festival, at the JT Pac, Kochi, which had entries from all over India. “The films are so much better now, in terms of production, camera technique, and the understanding of the medium,” he says. “And that is good news. We need a lot of meaningful art and story-telling in these intolerant times.”