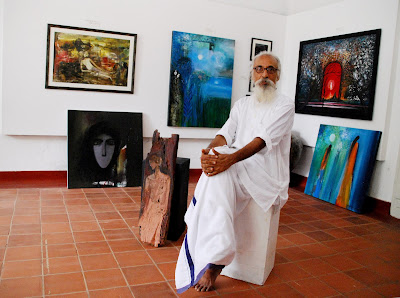 Paris Mohankumar's exhibition, 'Reverberations', focuses on the widespread environmental degradation in the world


Sometime ago, artist Paris Mohankumar entered a house in a tribal area at Wayanad in north Kerala. There, on a bed, he saw a girl with a broken leg. The bone, in fact, was sticking out. When asked why she had not been taken to hospital, he was told that the family had no money. A shocked Mohankumar stepped out of the house.

Later, when he into another house, he saw a wooden piece that was part of an old door. It had scratches, long embedded lines and a couple of holes. He took it home, and painted the figure of a woman on it, in a pastel shade, with the face turned sideways, and the hair held up in a bob. It was titled 'Rebirth'.

This piece is on display at the 'Reverberations – The Unheard Whispers' exhibition, by Mohankumar, at the David Hall gallery, Fort Kochi.

“I want to sell 'Rebirth' and use the money to provide treatment for the girl,” says Mohankumar, 70, who looks like a prophet, with his long and flowing white hair, as well as beard. “Then she will experience a re-birth.”

There are a total of 100 paintings, a mix of acrylic, oils, and watercolours. It comprises his work of the past ten years.

What appears in almost all the paintings are two themes: the presence of women, along with environmental degradation. In the painting, 'Gingee Fort', he has placed a single woman against the backdrop of the Parthenon in Greece, Gingee Fort in Tamil Nadu, the Sacred Heart Basilica in Paris and the Colosseum in Rome. But in front is a large tree, with several bare branches, that goes right across the canvas.

In many other paintings, he has shown wilting grass, leaves and trees. “In Wayanad, where I stay, factories are coming up and spoiling the landscape,” he says. “Most of the politicians are only interesting in making profits.”

Another endangered area is the Niligiri Biosphere Reserve. “I am told that more than 5000 acres are up for sale,” he says. “I am trying to highlight all this through my work.”

As for the presence of women in all the works, Mohankumar says, simply, “I worship them.” And there is a reason for it. His father, Kunjiraman, a Communist, was killed at the French enclave of Mahe in Kerala, when Mohankumar was only two years old. The artist was brought up by his mother and grandmother. “My mother avoided marriage so that she could bring me up, even though she was beautiful and had many suitors,” he says.

The gifted Mohankumar made a mark when he was a teenager through his paintings and sculptures. When a well-known monk, Swami Dayananda Saraswati asked him to do a scultpture of a Hindu god, Mohankumar was flummoxed. Because of his father's Communist leanings, there was no religion in the house. So, he consulted an encylopaedia which belonged to his father and did a bust of Socrates.

But when he displayed it to the monk, his followers were flummoxed.

“Everybody asked the guru, 'Who is this?',” says Mohankumar. “Swamiji replied that this is a 'God of Gods'.”

The impressed Saraswati invited Mohankumar to spend time at his ashram, which was just eight kilometres from his house at Mahe. Mohankumar went there and learnt meditation and yoga. Thereafter, he spent five years as a member of the Aghoris cult at Rishikesh. But all along, he was obsessed with art. And with the Swamiji's help, he went to Paris in 1974, and launched a successful career as an artist.

“My work has been shown in 40 countries,” says Mohankumar, who spent two decades in Europe. His high point was when he was honoured by UNESCO in 1988 as one of the 40 greatest artists in the world. Today, he is on a mission to encourage organic farming among the tribals in Wayanad.

“Mankind should realise it cannot survive, unless we nurture the environment,” says Mohankumar.

(Sunday Magazine, The New Indian Express, South India and Delhi)
at May 30, 2016