'I believe in Shirdi Sai Baba' 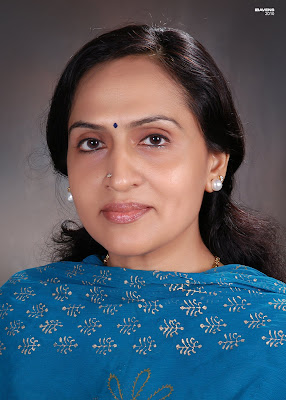 Bhadra Sateesh, the Deputy Mayor of the Cochin Corporation, says that Sai Baba is guiding every moment of her life

In June, 1995, Bhadra Sateesh was seven-and-a-half months pregnant. Suddenly, she gave birth prematurely. The baby girl died within two days. “I went into a deep shock,” says the Deputy Mayor of the Cochin Corporation.

A few days later, she began reading the 'Shri Sai Satcharita' written by Shirdi Sai Baba. In it, she came across a story. A woman who had lost her child days after it was born met Sai Baba. She told him about the tragedy.

“Sai Baba gave a coconut and said, ‘Within 12 months you will have a child,’” says Bhadra. “This turned out to be true.” When Bhadra read the story she felt hopeful. She prayed hard for a child. And, surprisingly, she got pregnant within three months, following her miscarriage. In 1996, a boy, Krishnan, was born.

“This miracle was caused by Sai Baba,” says Bhadra. She became interested in Sai Baba when, several years ago, she had visited the temple at Shirdi, along with her sister, Nirmala, who lives in Pune, 174 kms away.

“When I first prayed at the temple, I could feel a divine energy rushing into me,” she says. “I felt very happy and shed tears of joy.” She was amazed by Sai Baba’s life story. “He was a fakir who wore a tattered kafni (long robe) and begged for alms till his last day,” she says. “He did not found any religion or sect, had no spiritual philosophy or system of practices, did not initiate a single disciple, and left behind no apostles.”

And yet, Bhadra says, Sai Baba has caused extraordinary events to happen in her life. She was a teacher of computer science in various colleges. “I had never been interested in politics,” she says. One day, Bhadra was asked to stand for election for the councillor’s post. She accepted the opportunity, won the election and has now become the Deputy Mayor.

“It is a miracle,” she says, her eyes enlarged in shock, at her office at the Cochin Corporation. “This has been done by Sai Baba. There is no other explanation for it. I think Sai Baba wants me to serve the people and society. I have placed my life in his hands.”

Every day, at 7.30 a.m., Bhadra enters her pooja room in her home and sits in front of a small marble statue of Sai Baba. She closes her eyes and starts meditating. Immediately, she sees an image of Sai Baba. “It is of Baba, sitting on a rock, the right leg resting on the thigh of the left, and wearing a head scarf,” says Bhadra.
“He is gazing serenely into the distance.”

Initially, her mind would be filled with restless thoughts, but now she is able to remain silent for long periods of time. “Only thoughts of Baba come to my mind,” she says. “I feel calm and peaceful.”

So does she remain tranquil when bad things happen to her? “Earlier, when unfortunate events occurred, I used to get angry with Baba,” she says. “I would say, 'Why are you doing this to me? I pray to you often. I am a good person. Why are you harming me?’ In protest I would stop praying for a couple of days.'

But life has given Bhadra a different perspective. “Nowadays, when a bad thing happens, I don’t get angry at all,” she says. “In retrospect, I have observed that all the negative occurrences in my life were for my good. It has made me stronger and bolder.”

Bhadra says that when I first called her for an interview about her faith, she was reading ‘Stories of faith: the Chicken soup for the soul’. “Thanks to Baba, my life is full of these coincidences,” she says.