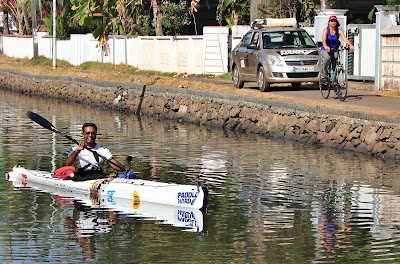 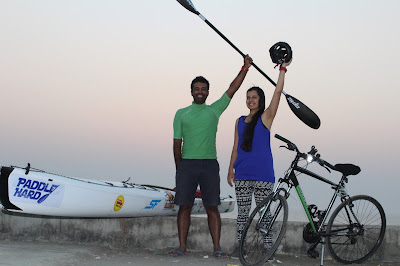 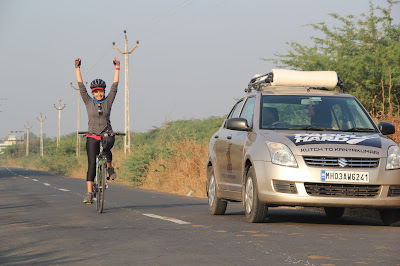 Kaustubh Khade has just completed a 3000 kms trip on a kayak, accompanied by his girlfriend, Shanjali Shahi, who followed him, by land, on a cycle

As kayaker Kaustubh Khade, 30, approached Manjeshwar harbour, at Kasaragod, in north Kerala, recently, he waved to a couple of people travelling on other boats. They waved back. But suddenly a fishing boat came from behind and a man tried to throw a rope across the kayak. “I was thinking, 'What is he trying to do?'” Kaustubh immediately told him, “Boss, I'll do whatever you want, but do not tie my kayak.”

So the fisherman called the marine police and passed the phone to Kaustubh. “When I told them why I was here, they told the fisherman to leave me alone,” says the kayaker. But to ensure that there would be no further problems, Kaustubh stepped on shore and went to the police station. “The cops were really sweet,” says Kaustubh. “We ended up taking photos. They told me that a few fishermen had been told to keep an eye out for unusual visitors.”

The Mumbai-based Kaustubh had set sail on November 17 from the town of Dwarka, in Gujarat, the home of Lord Krishna. The aim: to cover 3000 kilometres, along the western coastline, in 100 days. He went past six states: Gujarat, Maharashtra, Goa, Karnataka, Kerala, Tamil Nadu and the Union Territory of Diu.

On the journey, nicknamed 'Conquer The Coast', Kaustubh was accompanied by his girlfriend, Shanjali Shahi, who was riding a German-make bycyle, 'Schwinn Searcher'. She rode along the coast, and went from beach to beach. If there was an internal route to the next beach, she took that, or returned to the highway. She did an average of 50 to 80 kms a day, while Kaustubh did about 40 kms.

“During long stretches of the day, I would be out of sight of Kaustubh,” she says. “But we were always in touch by mobile phone.” Incidentally, for safety's sake, Shanjali was followed by a car and driver.

The couple had a specific agenda. “India has a 7,500 kilometre-long coastline, and we need to protect it,” says Kaustubh. “Very few people know about its beauty. We are also raising funds for a Mumbai-based NGO called Magic Bus. The members work with underprivileged children through sports. By playing games, children learn about gender equality, cooperation and fair play.”

As for Shanjali, she wants to inspire Indian women to go out, explore and have adventures. “Right now, most women are worried about their safety, especially in the rural areas,” says Shanjali. “So I tell them they should venture out in a planned and careful manner. There is no need to hide indoors.”

Along their journey, which concluded on February 7, at Kanyakumari, people have shown their appreciation. Says Kaushiq Kodithodi, who runs the Jellyfish Water Sports Club, at Kozhikode: “Both Kaustubh and Shanjali met with local youngsters and encouraged them to try kayaking, cycling and other activities. Unfortunately, adventure tourism is yet to become popular in Kerala. But I am sure they will serve as an inspiration.”

(Sunday Magazine, The New Indian Express, South India and Delhi)
at May 08, 2017