A Life Steeped In Art 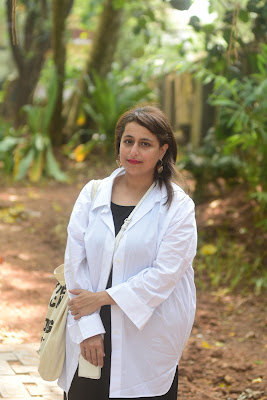 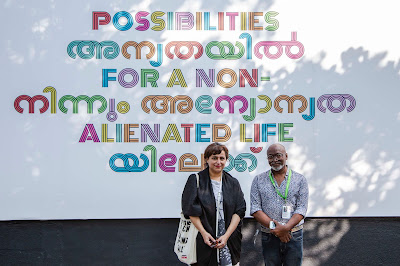 Sheikha Hoor Al Qasimi, the President of the International Biennial Association, talks about current trends in art as well as the Kochi Muziris Biennale

Photos: Sheikha Hoor Al Qasimi; With Bose Krishnamachari, one of the founders of the Kochi Muziris Biennale

Sheikha Hoor Al Qasimi sits beneath a tree at the Cabral Yard, Fort Kochi. A sliver of sunlight falls on her face but she does not move away. “I like the sun,” says the Director of the Sharjah Biennale Foundation. But she does look a bit harried. In 20 minutes, she has to hold a conference of the International Biennial Association (IBA), of which she is the president. She is grabbing lunch and talking to four journalists as well as a Biennale volunteer, while a photographer takes some pics.

Interestingly, Sheikha Hoor had a particular reason to hold the IBA meeting at Fort Kochi. “I thought it was important for people who had not come to the Kochi Biennale to come and have a look,” she says.

The Sheikha is a fan. And she has attended all four editions. “From the very beginning, the founders [Bose Krishnamachari and Riyas Komu] had a good idea and focus and they started with good intentions,” she says. “The quality of the installations has been increasing through every edition.”

Asked about the international trends in art now, Sheikha Hoor, who is the daughter of Dr Sheikh Sultan Al Qasimi, Ruler of Sharjah, says, “Nowadays, it is becoming more and more important for a Biennale to be about the city and the people. In Venice and other major biennales, initially, it was all about tourism. But now that idea has changed.”

As a newly-appointed curator of the second edition of the Lahore Biennale in 2020, Sheikha Hoor is on the lookout for new talent. “At the Kochi Biennale, you see a lot of artists from India and from countries like Bangladesh,” she says. “This is a chance for us to discover new and interesting work. And it is a platform of opportunity for the artists, too.”

And the opportunity is there because the art world is no longer Western-oriented. “Now, a lot of major museums and art festivals in the West are looking to Asia, Africa and Latin America,” she says. “There is a major shift in focus.”

As for the Sharjah Biennale, Sheikha Hoor has a multicultural vision. “It is not only about the Arab world, it is also about South Asia and Africa,” she says. “There are so many cultural influences. It is really important to have a wider viewpoint. And we want to support artists from all over. Arts and culture are one of the few ways where we can overcome boundaries like class, status, race and gender. We can bring people together.”

As to whether ordinary people are really interested in art, Sheikha Hoor says, “What we are doing in Sharjah, for example, is not for the people of today but those of tomorrow. It is an investment for future generations. The Sharjah Biennale started in 1993. I took over in 2002. And I see the changes.”

More and more people are now interested in art. “There are so many young people who come to see the Biennale and our other exhibitions,” she says. “When we started out there was a staff of five. Now there are 222 people working the year around. That’s how big it has got.”

Regarding the ongoing Kochi Biennale, Sheikha Hoor says, “It is very nice. There are many interesting works. The artists I liked the most were BV Suresh and Madhavi Parekh. I liked the way the way Madhavi told her stories, as well as her technique. I might invite her for Lahore.”

Lastly, there was good news for Bose. To be a part of the IBA, you have to hold at least three editions. “Since Kochi is now in its fourth edition we have appointed Bose as one of our Board members,” says Sheikha Hoor.

A happy Bose says, “It is a recognition of the work we have done since the  inception.”

Sheikha Hoor is also on the Board of Directors for MoMA PS1, New York; KW Institute for Contemporary Art, Berlin; Darat Al Funun, Amman and Ashkal Alwan, Beirut. She is also the Chair of the Advisory Board for the College of Art and Design, University of Sharjah and member of the Advisory Board for Khoj International Artists’ Association, New Delhi.

Sheikha Hoor is currently a member of the Prince Claus Award Committee and on the jury for the Bonnefanten Award for Contemporary Art (2018).