A Sight To Behold 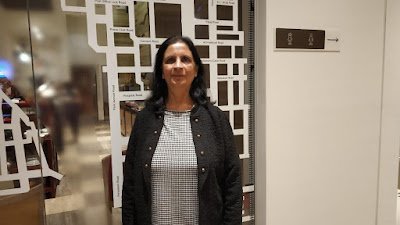 On a recent visit to Kochi, the visually-challenged Preeti Monga talks about the battling life she has led and about her Delhi-based NGO Silver Linings

When the visually-challenged Preeti Monga, the CEO of the NGO Silver Linings landed at Kochi airport on a recent evening, after a flight from Delhi, she immediately noticed the difference. “The smell was different,” she says. “It was fresh and slightly salty. But it was much warmer than Delhi. There were not too many bumps on the road. Traffic seemed to be less. It seemed to be a prosperous place. And there was far less horn-blowing than in Delhi.”

And she liked the people. “People in the South are much more humane than those in the North,” she says.

Preeti had come to give a talk organised by Aster DM Healthcare. The event was held to recognize the contributions of differently-abled individuals. Preeti’s talk was broadcast live to about 17,700 employees globally.

It has been a long journey for the 59-year-old. At the age of six, she lost her eyesight.

“The damage happened during the first three months of my birth,” she says. “I had been given a smallpox vaccine, which caused an allergy in my eyes. The allergy went away after a month. At that time, I had a functional eyesight. Then it started to deteriorate.”

Soon, she developed Retinitis Pigmentosa, which led to a complete loss of eyesight. Thereafter, for the next several years, Preeti went through a trying time. She was thrown out of a regular school when she was in Class 8 because of her blindness. “That was the time when I realised the gravity of my problem,” she says.

Preeti’s parents took her to a blind school in Delhi. But the school was in such a bad condition, that her parents did not want to leave her there. “The school did not admit  day scholars,” says Preeti.”So I stayed at home and read a lot.”

Her parents made her learn the sitar for eight years but she did not have an aptitude. Meanwhile, when she became a young woman, she developed an urge to get married.

“If people with sight have a right to live in this world, so did I,” she says. “So, I thought I should get married like my cousins and friends.”

But it was not easy. She faced rejection from hundreds of boys because nobody wanted to marry a blind girl. Eventually, Preeti found a man who said yes. But it turned out to be a bad marriage. She walked out after 11 years with her two children, Fiona and Mark.

Desperate to earn a living, she did not know what to do. She had only studied till Class 10. She stayed with her parents and they were paying for the expenses of the children, like the school fees. She did not feel good about it.

At this time, in the 1980s, aerobics had become a fad. So, she started teaching it. Preeti did well and conducted several classes a day.

In order to increase her income, she started selling pickles of a Delhi-based company, under the brand name of ‘Granny’s Pickles’. “I would go from door to door, shop to shop, street to street,” she says. Soon, she was selling double the number of bottles sold by the entire sales team. The company offered her the job of marketing and sales head. It was while there that she met Ashwani Monga. “I felt that he is a great human being,” she says. “So I proposed, but it took Ashwani a month before he said yes. And now we have been married for 22 years.”

Asked about Indian society’s attitude towards blindness, Preeti says, “This world has been made by sighted people for sighted people. There is no consideration that a blind person needs to use the same space. We have to learn to adjust. People feel that we are alien. They ask us how do we eat, walk or dress. But the technology of today helps us to use the phones and the computers, as efficiently as everyone else.”

That was when Preeti began a campaign among corporates to urge them to hire blind people.

Preeti has other suggestions. “If you give quality and value education from day one, and include blind children in the mainstream schools, they can do well,” she says. “One of our children got 88 per cent in her Class five final exams in a regular school. She uses an e-book reader.”

In 2006, Preeti set up her NGO Silver Linings. This is aimed at blind girls. And there is a reason for that. “I realised that the blind female child is the most marginalised in society,” says Preeti. “She is ignored by the family as well.”

At the moment she is running a hostel and a preparatory school. Later, these children will be sent to mainstream schools. “We also have another programme called Dignity, for working blind women,” says Preeti. “We offer whatever help required, like cooking and daily-use materials.”

It has been a rich and fulfilling life which she has chronicled in two books -- ‘The Other Senses -- An inspiring true story of a visually-impaired person and her road to success’ and ‘Flight Without Sight’, both available on Amazon.

And her tips for blind people are simple: “Work hard and believe in your abilities.

Learn everything possible. You have to equip ourselves with all that there is to learn. In other words, you must have a fighting spirit. You should take responsibility for your lives and not wait for other people to do something for you.”

An encounter with Khushwant Singh

Preeti Monga went to meet the famed writer Khushwant Singh at his apartment in Delhi to get some help. She was accompanied by her assistant Aditi. Preeti rang the bell. Khushwant opened the door. Then he said, “Hello Preeti, how are you? Please come in.” Then he took Aditi’s hand and led her in.

Preeti was left standing at the door. Preeti said, “Mr Singh, I am here.”

Khushwant came back and said, “What, you are Preeti. I thought she was the blind one and you are the assistant.”

Preeti smiled. Khushwant said, “I have always got the better of the public till today. You are the only one to baffle me. You don’t look blind at all.”