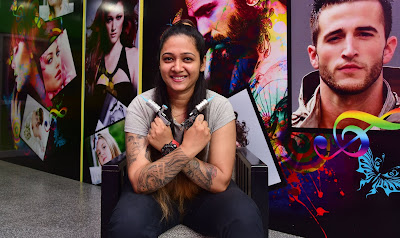 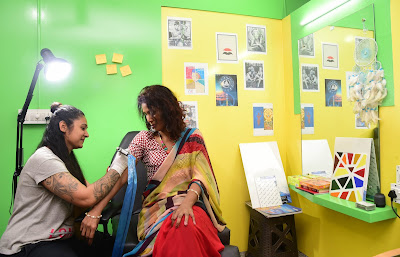 On most mornings, when Pooja Stanslas, a third-generation Malaysian of Indian origin looked at the mirror, after her bath, at her home in Kochi, she would feel depressed. Right across her right breast, there was a white scar. It was a grim reminder of the close shave she had: a small area had become malignant. At that time, in 2016, she had been living in Colombo. So, through surgery, the tumour had been removed. “To be careful, they removed more than what was necessary,” says Pooja. “So there is a rather large scar.”

Pooja, who works as an online journalist, toyed with the idea of doing cosmetic surgery. But she felt she should do something less invasive. So she felt tattoos would be a safe option. Through a mutual acquaintance, she came to know that the Delhi-born Ankita Jain was running a set-up called the ShivOham Tattoo studio at Kochi

So, Pooja got in touch with Ankita, who was initially apprehensive. “This was the first time I was getting such a request,” says Ankita.

She discussed it with her partner Priyanka Sivankutty, who told her, “This could make a difference to Pooja’s life.”

So Ankita agreed. And Pooja came over. They talked and clicked. “Pooja is a very down-to-earth person,” says Ankita. “Her only request was that I should make a mandala.”

So, on a recent November morning, Ankita, 28, got going. She cleaned the tattoo area with antibacterial soap solution and removed tiny hairs with a razor. Thereafter, she drew a mandala with the symbol ‘Om’ at the centre on a stencil and placed it over the breast. Then, using a disposable needle, and working carefully, she did the design, using organic inks. The work took all of three hours. “It has to be done perfectly, otherwise the tattoo will stick out, like as if it is embossed,” says Priyanka.

Everything worked out well. And Pooja is so happy. “Now when I look at the mirror, I feel so confident. The scar had been a constant and painful reminder. So, the trauma is receding. Now I can see the ‘Om’, one of Hinduism’s most sacred mantras and it makes me feel spiritual and grateful for being given a second chance in life."

As for Ankita, it was an elevating experience. “The expression on Pooja’s face when she looked at her tattoo was out of this world,” says Ankita. “I felt so happy that I could bring so much of happiness to her.”

In fact, so overwhelmed was Ankita that she told Pooja she would not be charging for her work. “I am hoping that other breast cancer survivors would avail of tattoos to get over their trauma, and I will do it for free,” she says. “This will enable women to overcome the stigma regarding tattoos.”

She says that Kochi is a conservative city. “Many women are scared because they are not sure about how their husbands, mothers-in-law or society would react if they did a tattoo,” says Ankita. Thus far, most of her women clients have come from the Navy personnel stationed in the city as well as North Indian families. “Most of the women prefer mandalas or floral designs like roses,” says Ankita. “They also like it on the back because as and when it is necessary they can cover it.”

Among Malayalis, it is the men, in the 20 to 40 year age group, who are her clients. “There is a big demand for images of Lord Shiva and Jesus Christ,” says Priyanka.

The tattoo artist is herself covered with tattoos on her arms. She has figures of an angel, a rose, a woman’s face and an image of a handsome young man. “This is how my father looked as a young man,” says Ankita. Unfortunately, her father passed away, aged 45 in 2012 of a heart attack.

She lives with that enduring pain but Ankita is also happy to be in Kochi. She had met Priyanka in Bangalore sometime ago where she had gone to do some freelance work. “Priyanka told me there is scope for a quality tattoo artist in Kochi, so I came in May, last year,” she says. “Kochi is a nice place. I am enjoying myself.”