From Malaysia, With A Sense Of Relief 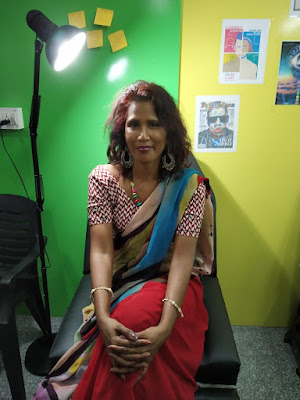 At 7.30 p.m. on a recent Wednesday, Pooja Stanslas, wearing a red T-shirt and grey leggings, walked up the first-floor steps of the Kerala State Beverages Corporation outlet at Kalamassery. Around one hundred men looked at her, some with their mouths open, a few with widened eyes, and others with smirks. Not surprisingly, she was the only woman present. Despite her heart beating fast, Pooja coolly bought a bottle of vodka and wine. “I never felt so stared at in my life,” she says.

Pooja is a second-generation Malaysian who has relocated to Kochi a few months ago.
“It is not easy to be a single woman in Kochi,” she says. “The city is socially conservative. The men are not used to seeing women speak confidently or dressed in a particular way. It remains a patriarchal society. The Malayali women are pushed hard by society to play a muted role. My women friends tell me, ‘Pooja don’t raise your voice. Always remain understated. Otherwise, you will not be able to get your work done’.”

Nevertheless, she says, the people, for the most part, have been very helpful. Once when she stepped out of a gym at Kalamassery, it was raining heavily. Three members, who were standing nearby, went out in the rain and got Pooja an auto-rickshaw. “Once they come to know that I am a foreigner, they were very accommodating,” says Pooja.

She came to Kochi because she wanted a break from her life in Malaysia. She says that as an Indian-origin Malaysian, she remains a second-class citizen.

In the 1970s, the Malaysian government came up with the term, ‘Bumiputra’. “It literally means sons of the soil,” says Pooja. “They comprise the Malays as well as the aboriginals. Because I am not a Bumiputra I am heavily discriminated against, in terms of access to education, jobs and business. Basically, you have to fend for yourself. I am still considered a ‘pendatang’ (a Malay word meaning immigrant) despite the fact that my grandparents were naturalised Malaysian citizens and my parents and I were born in Malaysia and speak Malay like a native. Heck, I even have a first class BA Hons. in Malay studies!”

When Pooja was growing up in the 1980s and 1990s, there were only five public universities and a complete absence of private universities. And for the minorities, there was a quota system. The Indians got 10 per cent, the Chinese formed 20 per cent, the Malays 60 per cent while the remaining 10 per cent belonged to the minorities like the Sri Lankans and the Eurasians. “The Indians, no matter how well they did in the entrance exams, could only get admitted in the university based on the quota,” she says.

In public sector jobs, there was a similar discrimination. “No matter how good you are, the top person will always be a Malay,” she says. “He or she may not have a good education or qualification, but because they belong to the right race and religion -- Islam -- they get the jobs.”

In the original Constitution, Islam was made the official religion. “When we were growing up, there was no talk of Malays, Muslims and non-Muslims,” says Pooja. “That was because a liberal form of Islam was practised. We would go to each other’s house. But later a stricter form of Islam began to be practised. The Malays began to look at themselves as Muslims first and Malaysians second. And they would say, ‘Look you are Hindu, Buddhist or Christian. We are different from you’.”

Then the Sharia law which governs personal behaviour and family matters of Muslims was introduced. “So you have a parallel judiciary,” says Pooja. “One which governs the Muslims and another which governs non-Muslims. It means that if you marry a Muslim you will have to convert and change your name. In the end, you will lose your identity. But when a Hindu marries a Christian, there is no compulsion to change.”

And there are other benefits for the Malays. When they buy a flat or property from a developer, they get an automatic seven per cent discount. “And in every building, there has to be a small mosque,” says Pooja.

People were not happy. Large numbers of Indians and Chinese, of the educated middle class, migrated to Australia and Britain. And Pooja, who is an online journalist and an academic copy editor, also followed suit. “I was fed up of the whole situation and decided to leave,” she says. “I did not see any hope or future in Malaysia.” She went to Colombo and spent three years there before moving to Kochi.

At Kochi, thanks to her grandparents having safely preserved their certificate attesting that they were Indians, Pooja has secured a Person of Indian Origin Card. She has now settled in Kalamassery where she has just bought a villa. And she is learning to adjust to the lower professionalism, as compared to Kuala Lumpur. “People like electricians and plumbers take a far longer time to repair things than back home,” she says. “And then, the work is not done perfectly.”

And she could not escape some bad experiences. Pooja paid a man, posing as a friend, Rs 2.35 lakh for doing interior decoration at her home. “Unfortunately, he has done sub-standard work, will not produce the receipts or return the money,” she says. “So I have filed a case in the Consumer Redressal Cell.”

Asked about the future, she says, “For now I am in Kochi and liking it. I feel as if I have returned to my roots. But who knows what will happen as I move forward? Life is so unpredictable.”

(The New Indian Express, Kochi, Thiruvananthapuram and Kozhikode)
at December 29, 2018