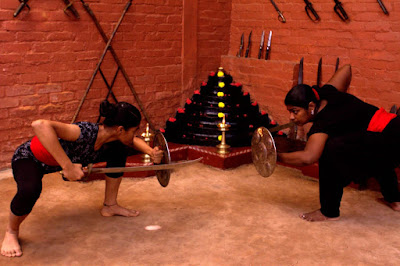 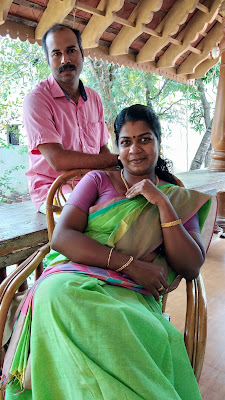 Kalaripayattu exponent Mereena Aswani, with the help of her husband, has started a kalari exclusively for girls and women at Fort Kochi. She talks about how the art form can transform a woman’s life

Photos: Mereena (right) at the kalari; with her husband Aswani. Pics by Vikas Ramdas

At 7.30 a.m., on a recent Saturday, inside the large shed of the Dakshina Bharatha Kalari, at Fort Kochi, Mereena Aswani gazes at the women standing in front of them. All of them are wearing black: T-shirts, track pants or salwar kameez, with a red sash tied around their waists. Soon, they raise their hands upwards, move forward, kick their legs up, turn around, move forward, and kick their legs up again. Later, they sit cross-legged on their floor and Mereena guides them through a series of arm-stretching exercises.

For years, Mereena had been assisting her husband, kalaripayattu exponent Aswani Kumar, but on March 8, Kochi Mayor Soumini Jain inaugurated classes exclusively for women. “It was a desire of my teacher, Sreedharan Gurukal to start a Kalari exclusively for women and I have achieved that dream, with the help of Aswani,” says Mereena.

In fact, the duo got a shed constructed, with a mud-pressed floor, while spears and shields hang on the walls, which have been painted in red. At 1200 sq. feet, it is a spacious area.

Once the local women came to know about the classes, they have stepped forward enthusiastically. There are Gujarati working women, ladies from the Muslim community, professional dancers, who want to strengthen their legs, homemakers and yoga trainers who want to learn a martial art. “The flexibility in yoga is different from the flexibility that you gain from kalaripayattu ,” says Mereena.

The women range in age from 25 to 50 years. The training is different for newcomers. Mereena looks at them and evaluates their level of fitness. “How flexible are they? Are they willing to work hard?” she says. “I start them off very slowly, with just a few steps. After about eight classes, I will introduce leg techniques.”

One who has been a regular is 38-year-old Thanuja Rauf, an Ayurveda doctor. “I had been learning kalaripayattu under Mereena even before the classes began officially,” she says. “She is a very good teacher. My flexibility has increased. There is a lot of stress relief. And you get a lot of energy. So you are able to be much more active than before. It has also boosted my self-confidence.”

But it is not easy. “Definitely, in the beginning, there will be body aches and pains, but you have to practise continuously,” says Mereena. “There is a saying, ‘no pain, no gain’. The biggest advantage is that you will be able to burn away negative energy.”

Interestingly, Mereena has been burning away this negative energy for decades.

It all began when she was only ten years old. Because of weak legs, she would fall down often. So, the doctor who treated her told her parents that one of the ways to develop strength in the legs was by practising a martial art.

For the family, this was an easy choice. Just two houses away, at Fort Kochi, was the master Sreedharan Gurukal who used to hold kalaripayattu classes. So Mereena was enrolled. Usually, she would come to the courtyard every day at 5 p.m., after school was over, for training along with a few ladies and girls. “I was the youngest in the group,” she says. And over time, as she practised regularly, her legs became stronger and the pains went away.

But Mereena never stopped. “I was hooked to kalaripayattu,” she says. Asked the advantages of practising the art form, Mereena says, “Your body becomes very flexible. Secondly, in my case, I have developed so much of courage that I feel confident that I can tackle a man bare-handed. Also, through kalaripayattu, I am connecting with our ancient traditions, which are steadily being lost. We are blindly following the West which is not a good thing.”

Kalaripayattu has other benefits, too. Before entering the kalari (ring), the kalaripayattu artist touches the ground with his hand. Thereafter, he or she touches the feet of deities like Ganapati and Bhadrakali, at the different corners of the kalari. Then you have to touch the feet of the guru. “Through these acts, you become humble,” says Mereena.

Apart from kalaripayattu, Mereena also teaches yoga. Last year, she had gone to Germany to teach yoga. At the kalari, Mereena gives a body massage for those who have body aches and pains.

Through all this Aswani is right next to her. The couple, who tied the knot on April 30, 2005, has two school-going daughters.

And they have a mission: to make Malayali women get fit. “They are unfit because they are giving up their lives to serve the family and don’t look after themselves at all,” says Mereena. “So I ask them to take out one hour a week only for themselves. And when they come to the kalari and exercise for an hour, they experience a lot of stress relief. So, they end up becoming better women, wives and mothers.”