Up above the world so high 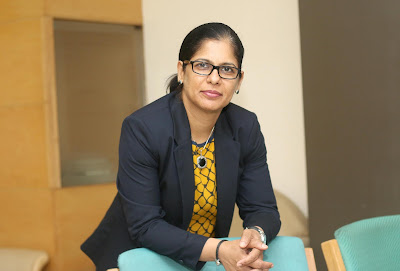 Santy Sajan’s turning point occurred when her father died when she was only seven years old. Starting her career as a nurse, she spent several years abroad. Today, she is Chief Executive Officer at Aster MIMS-Calicut

One morning, when Santy Sajan was seven years old, she was taken to the Medical College Hospital in Kozhikode. Her father was unwell. When she saw him, his head was covered with a beige bandage. Santy was lifted up and placed on the bed. Her father started caressing her face. “I understood that my father could not see me,” says Santy, the Chief Executive Officer at Aster MIMS-Calicut, while on a recent visit to Kochi. “Because of a brain tumour, he had lost his eyesight.”

After a while, her father started checking her nails, to see whether it had grown. Then he said, “I will cut your nails later.”

George Mathew Komath was a loving father. “I remember Chachan giving me a bath,” says Santy. “He would comb my hair and dress me. And, however late he came, after his work as a farmer, the family would pray together. Chachan would also tell me stories. One day he told me he wanted to send me to the best school.”

A few days later, at their home, in the village of Chakkittapara relatives carried a cot and placed it in the living room. “And then I saw Chachan covered in white,” says Santy. “I went and hugged him. But his body was cold. But I thought, ‘Chachan is smiling, and his eyes are partially open’.”

But it was only when the body was taken to the cemetery, placed in a coffin and then put in the ground that Santy finally understood that her father had died. George was only 28 when he passed away. It would be a turning point in her life.

As the eldest of four siblings, two brothers and a sister, Santy developed a drive very early on. “My mother and grandmother constantly spoke to me about the importance of education and the need to get a job,” says Santy.

Later, Santy did her BSc nursing at the SNDT Women's University at Mumbai, and worked briefly in the Hinduja hospital as a staff nurse. The chief of nursing was a Janet Walker from the UK. “During a meeting, she began talking about our mission,” says Santy. “And I wondered how long would it take me to get to Janet’s position. What are my strengths and weaknesses? So I always had goals.”

From Mumbai, Santy moved to the Sulaimania Children’s Hospital in Riyadh where she worked for six years. Following that, she did another stint of six years at the Sultan Qaboos University Hospital in Oman.

But her thirst for education remained strong. She returned to India in 2000 and did her M Sc in nursing from Manipal University. Thereafter she joined Columbia Asia Hospital in Bengaluru as the head of nursing. After only 14 months, she went to the US. While there, she did a PhD from the Catholic University of America. Her thesis was on pain management of extreme preterm babies. Thereafter, she did her MBA--Business of Medicine from the Carey Business School, John Hopkins University as well as a Master’s in Health Informatics from the University of Maryland (2007-10). She also worked in different hospitals.

Santy is a rare mix of the intellect and the heart. And over the course of her career, she developed a deep love for the health profession. “It's about taking care of people with love and compassion,” she says. “I see myself in their shoes. When they come to a hospital, they are at their most vulnerable. So I, as well as the team members, try to make them feel as much at home as possible.”

But, unknowingly, Santy also felt the tug of home herself. Despite a highly successful career abroad, she never felt that she truly belonged. “Wherever I worked, I always felt that I was living in a foreign society, even though it was inclusive and I had the best job,” says Santy. “I just felt I could be my true self only in my own country.”

Santy returned to India in 2013 and became General Manager, Columbia Asia Hospital in Bengaluru. After three-and-a-half years, she moved to Kochi where she became the Chief Operating Officer of Aster Medcity, Kochi. “I am extremely grateful to Dr Azad Moopen, the chairman and managing director of Aster DM Healthcare who saw the potential in me,” she says. And from January 2018, Santy has been stationed at Kozhikode. The Aster unit is a 535-bed hospital with 2100 employees. “It is the best in North Kerala and we want to retain that position,” says Santy.

On the personal front, Santy feels at peace. “I love the mud, rains, jackfruit, as well as my own language,” she says. “My roots have finally pulled me back.”

And she has somebody to share her joy with: her husband Sajan. She met him in Class 10 at the St George’s High School at Kulathuvayal, and fell in love immediately. Subsequently, they got married on May 8, 1994. “Sajan, who has a health business, has been my pillar of strength through all these years,” says Santy, who has a son, Tyan, who is studying in Class 12. “Without them both, I would not have been able to achieve all that I have done so far.”

But her father’s influence remains undiminished. “I pray to him every day,” says Santy. “And Chachan has protected me throughout.”