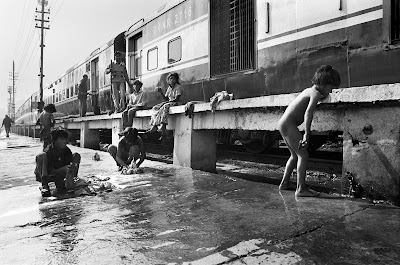 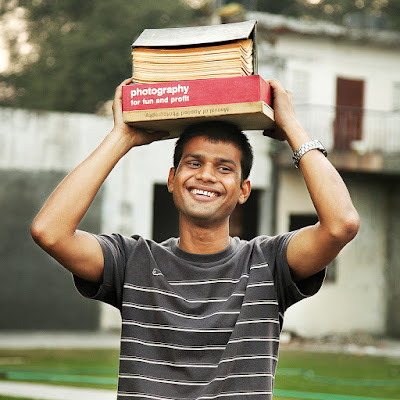 At his photography exhibit, at the Kochi Muziris Biennale, Vicky Roy focuses on rag-pickers at the New Delhi railway station. Once upon a time, he was one of them

In a photograph, at an exhibition titled ‘Street Dreams’, by the New Delhi-based photographer Vicky Roy, at the Kochi Muziris Biennale, a nude six-year-old boy is about to have a bath, holding a bar of soap in his right hand. Behind him, on the wet platform, at the New Delhi railway station, two boys are sitting on their haunches, and washing clothes. On a cement ledge, a twelve-year-old girl, with twin ponytails, appears to be smoking a beedi. Next to her, two workmen are using wet mops to clean the outside of an air-conditioned bogie. But one of them has turned around to look at the camera. The image has been taken from the railway yard.

“This is usually where all the street children, who loiter near the station, have their bath,” says Vicky, who uses a Sony a7R II camera. “As for the morning ablutions, they jump into a toilet in an empty bogie and do the needful.”

In other images, you can see children begging, playing with each other, having a nap on the platform floor or selling helium balloons.

This was a world to which the 32-year-old Vicky belonged once upon a time. In the late 1990s, he was staying with his uncle and grandmother at their home in Purulia, West Bengal. One day when his uncle slapped him, Vicky got incensed. He ran to the railway station. There, he jumped into the unreserved compartment of the Purushottam Express, which came daily at 8.25 a.m. Nineteen hours later, he reached Delhi. Vicky had nowhere to go. So, he sat at one corner of the platform and cried.

In the morning a few children approached him. “They gave me rice and dal, to eat,” says Vicky, “After that, I explained to them why I had run away from home. The children said, ‘Don't worry you can be with us’. I spent the next two days watching what they were doing.”

Whenever a Rajdhani or a Shatabdi Express terminated at the platform the children would go to the pantry car to get food. Soon, he started working with them as a rag picker. At night they went to a shelter near the railway station where they got a blanket for Rs 1.

It was not an easy life. On the platform, there were criminals who were mostly pickpockets. “Sometimes, they would steal the money which we got through begging,” says Vicky. “If a passenger lost any luggage, they would give us a beating, even though we may be innocent.”

Five months later, Vicky got a job of washing dishes at a roadside eatery. One day, Sanjay Srivastava, a volunteer from an NGO, Salaam Balaak Trust (SBT), met Vicky and said, “You should be in school.”

Vicky agreed and was taken to the SBT. Soon, he was enrolled in Class six of the Government Boys’ Middle school at Paharganj. The years went by. But in the Class 10 public exams, he got poor marks. “My teacher told me that since I am not very good in studies, I should opt for something else,” he says.

Vicky expressed an interest in photography. Initially, through the Trust, he worked as an assistant to a British photographer Dixie Benjamin. Thereafter, Vicky studied photography at the Triveni Kala Sangam and attached himself to a portrait photographer Anay Mann, with whom he is still working on particular assignments.

In 2007, Vicky held his first solo exhibition, ‘Street Dreams’, with the support of the British High Commission. The exhibition was well-received and travelled to Britain, South Africa and Vietnam.

It was a turning point for Vicky. For the first time, he was treated with respect. “As a rag picker, I had seen the worst side of human behaviour,” he says, with a smile.

In 2008 the Maybach Foundation selected him to shoot the reconstruction of the World Trade Centre in New York. As part of the programme, he undertook a six-month course in documentary photography at the International Centre for Photography, at New York.

In 2013, Vicky’s monograph, ‘Home Street.Home’ was published by Nazar Foundation at the second edition of Delhi Photo Festival. He received a fellowship in 2014 from MIT Media Lab, Boston to study technology in photography. In 2016, he was on the Forbes 30 Under 30 in Asia and in 2018, he was in Vogue Magazine’s 40 under 40.

Vicky finally went back home in 2004. “A lot of people gathered near our home,” he says. “Many were crying. My family went through a lot of worry and stress. But they were so happy that I had come back. They did not have enough money to go in search of me. And they never imagined I would go all the way to Delhi.”

Meanwhile, in the past few years, Vicky has gone all over the country giving talks about his life and career to colleges and corporates. Thanks to this steady income, he has brought his mother a three-bedroom house. Sadly, his father passed away in 2008. “I am helping my brothers and sisters,” says Vicky, who goes often to Purulia. “Two of my sisters are studying in college. The economic situation in my family has steadily improved. I have to give thanks to the trustees of the SBT and my mentor Anay.”