It’s all bright and shining 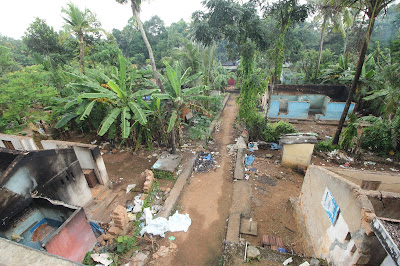 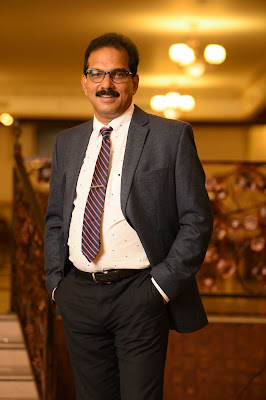 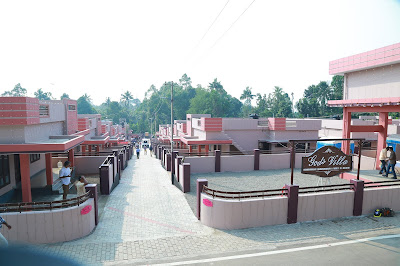 A few weeks after they moved into their well-made houses, residents of the ‘God’s Villa’ of the Kizhakkambalam Panchayat talk about their experiences

Photos: The colony before the change; Sabu M jacob, Chairman and Managing Director of the Kitex Group; the colony today

The sun is beating down fiercely at noon on a day in March at ‘God’s Villa’ of the Kizhakkambalam Panchayat. Nobody seems to be around. The tiled road between the houses is deserted. It would have been completely silent except for a few voices that are emanating from a TV set at widow Subhadra P’s house. The seventy-year-old, wearing a maroon nightgown, is indeed relaxing by watching a show. Her daughter, who is staying with her, has gone to work as a teacher in a nearby school, while Subhadra’s 13-year-old grandson is also at school.

And Subhadra is in a happy mood. “At this moment we are living in paradise,” she says. Subhadra and her family moved into a brand-new house three months ago. It has been built by ‘Twenty20 Kizhakkambalam’, a CSR initiative of the Kitex Group, along with the Kizhakkambalam Panchayat.

“We were shocked when we saw the finished house,” says Subhadra. “It is so well-made. We never thought that one day we would have the luck to stay in such a beautiful house.”

The 750 sq. ft. house is set on four cents of land. There are two bedrooms, two bathrooms, a living-cum-dining room and a kitchen. There is a small work area at the back. Outside, there is a car parking facility. Earlier, water connections had also been provided. There is a storage tank of 1000 litres.

Subhadra has also bought a dining table, beds, TV, sofa, and a mixer/grinder at half the price, Rs 1 lakh, from Twenty20.

It is no surprise that Subhadra calls her house a paradise. She had been living in a 240 sq. ft house which she got through the Laksham Veedu Colony (One-Lakh Housing Scheme) which was initiated by the State government in 1972 to help the landless. “But we had to share the house with another family. So we had only 120 sq. ft. A single wall was the divider,” says Subhadra. “We lived in two rooms and had a small kitchen. The houses were not maintained properly.”

As Subhadra busies herself filling glasses with ginger juice, neighbour PP Murali drops in. The 56-year-old painter has been living in the area for decades. “In my childhood, eight people -- my parents, my sister, two cousins and my two grandmothers lived in a tiny space.”

He is deeply grateful to the chairman & managing director of the Kitex Group Sabu M Jacob. “Their family has been doing good work in our village for generations,” he says. “They have set up a mall where we can buy essential items at only 50 per cent of the selling price.”

And other types of help are also being rendered. Recently, one of their neighbours, a forty-year-old woman was suffering from cancer. “Sabu Sir paid almost the entire cost of the treatment and now the lady is well and has gone back to work,” says Murali.

There has been a change in the psyche of the people. Says one resident, “Today, my identity has been changed from Peter Abraham, Laksham Veedu Colony to Peter Abraham, God’s Villa, 2037- Central Drive. This has increased our confidence, our standard of living and will have an impact on future generations.”

Peter is also happy that the crime rate has gone down drastically. “Earlier, it was a hotspot of criminals, drunkards and drug addicts,” he says. “Many fights would take place.”

Incidentally, the cost of rebuilding 38 houses of this colony is Rs 6 crores, out of which Twenty 20 has spent Rs 5.26 crore while the panchayat gave Rs 74 lakhs.

The biggest impact of the panchayat’s work has been the loss of image for the political parties. “The Twenty20 Kizhakkambalam’ has shown us that what political parties were not able to do in 71 years, they did it in four years,” says Murali, who was once a CPI party worker. “This is the only panchayat where all the political parties -- be it the CPI(M), Congress or the BJP  -- have joined hands to oppose the panchayat. But the people are firmly behind Sabu Sir.” Murali says that he is certain Twenty20 Kizhakkambalam will sweep the next elections in 2020.

Sitting at his dining table on the ground floor of the spacious Kitex headquarters, moments after lunch, Sabu Jacob is nursing a sore throat. So he sips a cup of hot green tea. Asked why the company has been so generous, Sabu says, “Right from my grandfather’s time we have always been helping the people. My father always told me that when the business grows, the locality should also grow. That is sustainable growth.”

Once his father told Sabu, “Look at Mumbai. Somebody lands at the airport, he will say, ‘what an excellent place’. But when they come out what they are seeing on both sides is the Dharavi slum, the largest in Asia. So that should be changed.”

Sabu pauses and says, “Every year we are growing, and our resources are increasing. So, we are pumping in more money into the community.” (Kitex, which has 10,000 employees, is the third largest producer of children's apparel in the world).

Sabu acknowledges that the political parties have ganged up against him. And recently, when work had begun to make a rubberised road, there was opposition from the politicians and the work has come to a standstill. “The matter is in the court now,” he says.

Unlike most roads which have a thickness of 2 cms officially, but actually is less than 1 cm, these rubberised roads will have a thickness of 45 cms. “If the drainage is done scientifically, these roads will last for 25 years,” says Sabu. “So, you can understand why they would not want a road like this to be built in our panchayat.”