When women are easy game 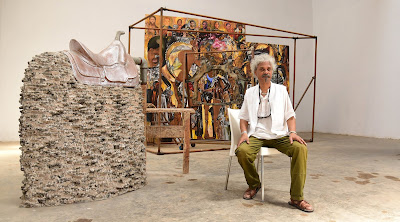 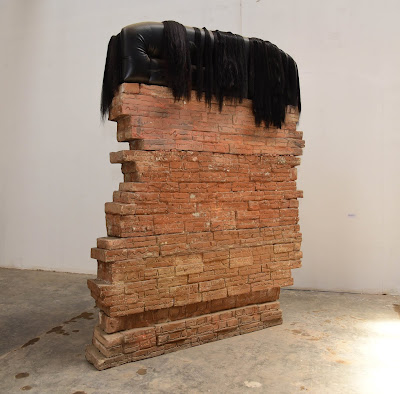 Artist Probir Gupta’s installations at the Kochi Muziris Biennale focuses on the violence meted out to women in zones of conflict, and the destruction of world heritage sites

As you step into the TKM Warehouse at Mattancherry, Kochi, a stand-alone brick wall catches the eye. That’s because the top is covered by black upholstery, from which hangs several strands of black hair. It looks benign, but Probir Gupta, a featured artist of the Kochi Muziris Biennale, is implying an act of extreme brutality.

“This is a reference to the Muzaffarnagar communal riots of 2013 when several women were raped inside their own houses,” says Probir, who has titled the installation, ‘Witness to Turbulence’. “Finally, seven women decided to speak out about what had happened.”

On the bricks are engraved ECG reports of those who are paranoid. “Paranoia, in this case, happens when you are assaulted, or when you are fearful or being threatened,” says Probir.

In any area of conflict, it is the women who are first attacked. This has happened throughout human history. “At present, the Rohingya women are being gang-raped and tortured by Myanmarese soldiers,” says Probir. “This is happening in Syria’s ongoing civil war. It happened in the 1971 Bangladesh War. Korean women, who were called ‘Comfort Women’, were raped by the Japanese soldiers during the Second World War. I wanted to symbolise this ‘comfort’ by the fleshy upholstery. As for the hair, it is to remember the women.”

Probir’s second installation, ‘Time is a rider’ is also about women in distress.

There is a saddle which is placed on a mound that looks like a horse’s back. But if you look closely you will see the casts of hundreds of feet of women.

These are the actual footprints of women who fled Bangladesh during the partition of India in 1947. From a middle-class life, they went tumbling down the social ladder and spent years working as domestic helps in Kolkata households. And every evening the women would meet at a temple dedicated to the snake goddess Manasa in the suburb of Sursuna.

“They would sing and cry, thinking about the past, and shared each other’s pain and sorrow,” says Probir. “And they always prayed to the Devi for protection.”

In another installation, there is a bust of Lord Buddha, whose face has been defaced. He is looking through a large metallic lens at a sculpture which has multiple feet. There is also a brass plate with the date April, 2003. “This is a reference to the time when the Iraqi museum in Baghdad was vandalised by American soldiers during the war,” says Probir. “It had housed some of the most important and sophisticated items of the Mesopotamian civilisation. As a citizen of this world, I wanted to express my outrage.”

The Buddha is also a reference to the to the huge sixth-century Buddha statues at Bamiyan, Afghanistan which were destroyed by the Taliban in March, 2001.

Probir has also done abstract paintings, one of which is called ‘What If?’ Probir asks the viewer to imagine American President George W Bush taking oath as the President of the United States from legendary black rights activist Dr Martin Luther King. What if, indeed!

Probir is a Delhi-based artist. He grew up in Kolkata, and while in college in the 1970s he was keenly observing, through the media, the many armed struggles all over the world as well as closer to home. “In Bengal, there was a movement against zamindars or landlords who were ruthlessly snatching land from the people,” says the 59-year-old. “It was about inequality and the use of brutal force. My work is about people and situations. I don't claim myself to be from the left or the right. I'm basically for human rights.”

Probir’s works are inspired by actual events. “In English, when you say black and white, like I have black and white evidence, it is full proof about something,” he says. “My works are all based on situations which are not fictional, but actual stories and actual happenings.”