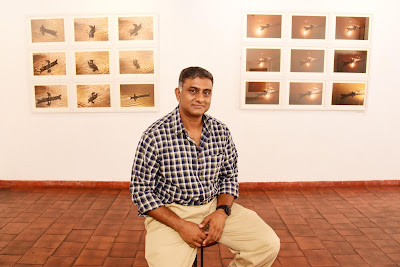 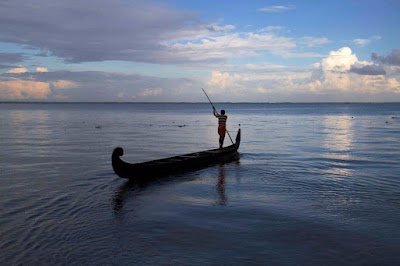 In his solo exhibition, photographer Praveen Rengaraj has focused on the lives of fishermen in and around Kochi

Photographer Praveen Rengaraj stood on Mandapam beach in Tamil Nadu. It was a tranquil setting. A clean beach, the roar of the waves, wisps of cloud in the sky on a December morning. Soon, the fishing boats returned. There were loud cries of joy. It had been a good day’s catch. Praveen approached them. They readily agreed to be photographed. One later took him for a ride. When he returned, a fisherman by the name of Guruswamy requested him to come to his home for lunch.

It was a two-room thatched hut near the beach. Praveen sat on the floor and had a meal of rice, rasam and the choicest fish. In the end, he offered Rs 500 because he felt happy. Guruswamy said, “How can I take any money? You are my guest.” Praveen was moved. “This behaviour of theirs, so friendly and large-hearted is what drew me towards them,” he says.

Praveen returned to Kochi and began taking photographs of fishermen. It helped that his apartment overlooked the backwaters. Later, he shot in different parts of Kerala, in Bengal, Sri Lanka, Sweden and the US. Today, his first-ever solo exhibition called ‘Beyond Fishermen’, is taking place at the Kashi Art Gallery at Fort Kochi (April 6 - May 31). Interestingly, he decided to put up the photos only of the fishermen in and around Kochi.

Praveen has taken images of the boatmen, sometimes in the early morning, as the sun is rising, when they embarked for fishing, or when they returned, at twilight, with the sunlight like a single ray just lighting up the fisherman’s body as well as a portion of the boat, or when they sat on the river’s edge with an introspective look on their faces. Looking at the images, viewers become aware of the solitary nature of the job.


“For me, a fisherman is an extension of nature,” says Praveen. “I have not viewed him as a person in physical form. Instead, he is faceless, almost like a shadow. For me, God is the ultimate artist, and a fisherman steps in from one side and adds a new perspective to the water body.”

Praveen has gained a new perspective about fishermen thanks to his constant interactions. “They have a deep belief in nature,” he says. “Many have the conviction that nature will not disappoint. If not today you will get something tomorrow. So, even if he does not get fish on any particular day, the fisherman is not disappointed. All fishermen have a positive attitude. You wave at them. They will wave back.”

Another reason for their joy could be the close proximity to water. “It is a calming medium,” says Praveen. “The sound of a waterfall, the dribble of rainwater falling from a roof to the ground, or the slap of the oar against the water, you tend to fall into a meditative mood..”

A constant interaction with Nature leads to humility, too. “A fisherman’s material possessions is very limited,” says Praveen. “In this age of voracious consumerism, you can only drive only one car at a time. Yet people want two or three cars. People have 30 pairs of shoes but can only wear one pair at a time. Does happiness arise from owning things? I have no idea. In many ways, the fisherman’s simple existence is a life lesson for all of us in the middle class: less is more.”

Praveen’s ardent desire, through the exhibition, is to make people aware of the fishermen. “They have been the mainstay of Kerala for centuries but we have not given him the respect that he deserves,” he says. “He has always been an unsung hero. During the floods last year it was the fishermen who saved so many lives. And without their tireless work, you cannot enjoy fish in your cuisine.”

Praveen also enjoys photography with a passion. His life turned when his mother gave him an Agfa camera when he was only seven years old. The son of an Army officer, photography, however, has not been a full-time career. Instead, he worked in the tea industry, first as a planter and later as a taster. Then he shifted professions and began developing high-end boutique hotels. But through it all, photography remained a constant. “I hope one day to bring out a coffee table book on the fishermen,” says the 47-year-old.