The princess and the elk 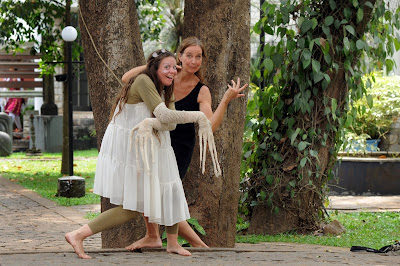 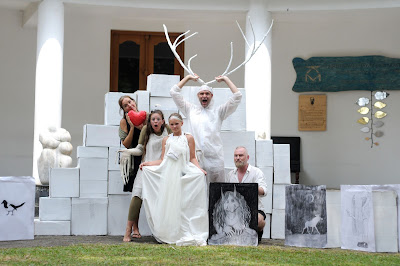 Photos by A. Sanesh. Petra-Eleonora Näslund (in white) and Susanne Olsson

Swedish actor Petra-Eleonora Näslund is wearing a white skirt, over a green jumper. But what catches the eye are the white gloves, from which her fingers extend for over a foot. She also wears an exaggerated amount of rouge on her cheeks.

On the grassy lawns of the Kerala Museum, Kochi, recently, as guitarists Lars Svedberg and William Larsen Naslund strum a Swedish folk tune, Petra, who plays the Princess Tuvstarr, from a Swedish fairytale, says, “Once upon a time, in a land far far away, where the wind was blowing so hard, and the snow was dancing all day. Brrr...” Petra starts shivering.

Then actor Lindy Larsson, who plays a big elk with antlers jutting out from the top of his head says, “Hoo Hoo.” Several children who are watching the play start giggling. Then the duo dance next to each other, again accompanied by the guitar sounds.

The actors had adapted a short story called ‘The Tale of the Elk and the Little Princess Tuvstarr’ by Swedish painter and illustrator John Bauer and writer Helge Kjellin. It is a simple story of the Princess Tuvstarr who falls in love with the elk but he walks away and breaks her heart.

“But in our story, the elk returns with a red heart,” says Petra.

Petra and her colleagues had come on a cultural exchange visit to Kochi. Apart from their performances, they held hour-long workshops on mime and music. “More than 400 students between the age of 2 and 14 from private as well as government schools took part,” says Kerala Museum Director Aditi Zacharias. “The Swedish Arts Council and the Museum sponsored the event.”

In their workshops, Petra and her colleague Susanne Olsson focused on physical movements. So children swung their arms as if they were the branches of trees or stamped their feet like the way bears walk. And they also encouraged the children to paint the elk.

It did not take long for the Swedish duo to get impressed. “The students started to paint the elk in different colours and it was fantastic to see their talents,” says Susanne. “They also made beautiful sculptures, using their bodies and I believe they got the inspiration from the many statues in India. The youngsters have a certain advantage because of India’s ancient and deep-rooted culture.”

Susanne noted the different ways of raising children. “In India, the parents have much more control over the children,” she says. “On the other hand, in Sweden, the parents are more like friends.”

However, there are many commonalities. “All children are natural, spontaneous, and joyful, whether in India or Sweden,” says Petra. “During some segments of the performance, the smaller children laughed very loudly but the older children did
not. Then in other sections, the older children found it funny and not the younger ones.”

They smile and Susanne says, “We are so keen to come again next year.”