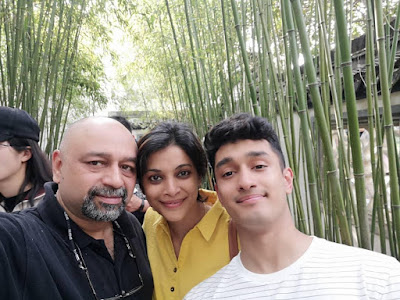 CORONAVIRUS OUTBREAK
Pic: Suresh Varma and his family during happier times
By Shevlin Sebastian
On most mornings, these days, when entrepreneur Suresh Varma wakes up at his home in Beijing and checks his mobile phone, he is sure to see three messages. They are from the Indian Embassy, the local municipality and mobile service providers. They all have one plea: about the need to take precautions ever since the fatal coronavirus erupted in Wuhan, which is 1150 km from Beijing on December 31. So, Suresh is told, like lakhs of Beijing residents that he should wear facemasks if he is planning to go out especially towards crowded places, and drink water all the time.
The virus thrives if the throat is dry,” says Suresh, by phone from Beijing. “There is a need to keep the throat hydrated all the time. So, we are told to carry water bottles all the time.”
There are about 40 Malayalee families in Beijing, for a total of 120 people. They are mostly working for multinational firms, banks, newspapers, schools as well as embassy staffers. At Wuhan University, there are a few Malayalee students. “But till now, it looks like not a single Malayalee has been infected,” says Suresh, who is the president of the Beijing Malayalees Association. “As you know, Wuhan and four other towns (total population: 22 million) have been locked down. No one can go in and no one can come out. The railways and the airports are closed. It is a tense situation. But the government is on a war footing.”
But the odds are stacked against them. One major reason is the timing of the outbreak. On January 25th is the Chinese New Year. One week before, all offices had closed. Schools were shut two weeks earlier. “What is going on in China is a mass internal migration,” says Danny Geevarghese, a Beijing-based freelance writer. “Millions of people are travelling back to their hometowns.”
So, it is no surprise that cases have been reported in 27 provinces, with 41 deaths so far. And numerous people have already travelled abroad for vacations. So nobody knows who has taken the virus outside.
Cases have already been reported in Taiwan, USA, South Korea, Thailand and Japan.
To prevent further outbreaks, at Beijing airport, the authorities have put up large temperature-scanners. “You just walk past the scanners,” says Suresh. “If you have a slight temperature, they will take you aside and check you.”
As to whether there are fears in China of this becoming a national as well as a global epidemic, Suresh says, “They are hoping it is not. Scientists worldwide are working very hard to discover a vaccine. Let’s hope they make a breakthrough quickly.”
(The New Indian Express, Kerala editions)
at January 25, 2020