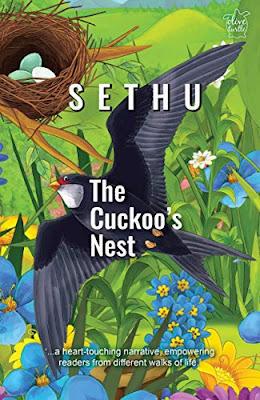 Malayalam author Sethu’s first novel in English, ‘The Cuckoo’s Nest’ is about a house for helpless girls run by a former nun

One of the surprises when you pick up ‘The Cuckoo’s Nest’ by author Sethu, his first English novel, is the foreword. It is written by none other than Sr. Jesme, who wrote the best-seling 'Amen', the life of a nun in Kerala. But then it no longer becomes a surprise when you realise one of the main characters is Madam Agatha, a former nun who runs a home for troubled girls from all over the country.

But Sethu clarifies that he had not read Sr. Jesme’s ‘Amen’ when he wrote the book, which has been published by Niyogi Books. However, he was aware of the troubles faced by her and other nuns in their daily life because of the widespread coverage in the media. “Maybe, the impact was unconscious,” he says. However, Sethu received a compliment when Sr. Jesme called him up, after reading the novel and said, “This is my story.”

In the foreword Sr. Jesme writes, ‘Sethu has imbibed the nuances of a woman’s mind who has left the convent life and is to be commended for creating a character like Madam Agatha. She has transformed herself from a religious entity into a secular personality.”

This is true. Because, very early in the novel, Agatha says, “This is not an orphanage run by the mothers or a madhom run by the swamis. I had never asked you about your religion or caste, Neither did I listen to your private prayers to find out your religion. Your prayers are nothing but your attempt for a private communication with the Almighty.”

She also told the inmates that there should be no loud prayers or chanting of bhajans of any community in the open hall. If one wanted they could do so privately in their room, without disturbing the peace of others. This would be a secular space and only those who believe in secularism and tolerance should join.

And Sethu had a specific reason to focus on these subjects. “It is to highlight the situation the country is going through,” he says. “This is my first socio-political novel.”

At the ‘Cuckoo’s Nest’, there is a procession of girls from all over India, like Sabeena, Parveen Singh, and Ranjini, who are suffering from various psychological issues and running away to get some mental peace.

Asked why he attempted a novel in English, Sethu says, “It was an adventure or you can call it a misadventure.”

What is interesting to know is that Sethu studied in a Malayalam-medium school in the village of Chendamangalam. “I did not learn English properly,” he says. “What I know is acquired English. When I was writing ‘The Cuckoo’s Nest’, over six months, I often consulted the dictionary as well as a thesaurus.”

Many of the characters are composites. What helped was that thanks to his more than four-decade-long working career Sethu has worked in Maharashtra, Tamil Nadu, Punjab, Madhya Pradesh, Delhi, Andhra Pradesh and Karnataka. And during his career, Sethu has met a wide variety of people. “I am also comfortable with the languages and cultures of these places,” says Sethu, who retired in 2005 as chairman and managing director of the South Indian Bank.

The reviews from readers have been positive. Says Moumita Roy: “The story idea is unique and fresh. The character of Madam Agatha is well researched. The scenario of the plot is relatable with current India. The story has been narrated nicely. I enjoyed reading it.”

And Sethu is also enjoying his 55th year as a writer. He has published 35 novels and short story collections. Among the many prizes he has won is the Kendra Sahitya Akademi Award, the Kerala Sahitya Akademi Award as well as the Vayalar Award. “It has been a long journey,” says the 78-year-old with a smile.

(The New Indian Express, Kochi and Thiruvananthapuram)
at March 21, 2020