Of abandoned houses and multiple fences 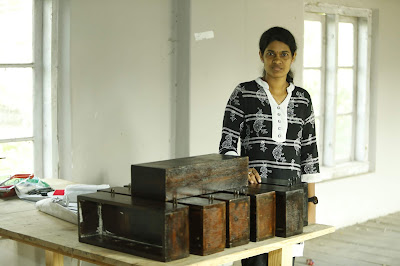 The Jaffna-based artist Jasmine Nilani Joseph has spent two months at Fort Kochi thanks to a residency of the Kochi Biennale Foundation. She talks about life as an artist in Sri Lanka

Jasmine Nilani Joseph sits next to a window in a large hall at Pepper House, at Fort Kochi. On a table in front of her, there are long wooden boxes. “Tamils have a tradition of collecting jewels,” says Jasmine, an artist from Sri Lanka. “Normally, they don’t wear the jewels, which they have. They keep it inside a box, and tell people, ‘I have this much jewellery’.”

Right next to the boxes, using a pen, she has drawn images of abandoned houses with a black pen on white paper. “These houses, like the jewellery, are there as a display, not for use,” says Jasmine, who had come from Jaffna to spend two months at Fort Kochi based on a residency given by the Kochi Muziris Foundation. “So I wanted to connect the two.”

Abandoned houses also raise questions in the mind. “Whose house is this?” says Jasmine. “Who lived here? How was the house in earlier times? Every house has its own story and memories. As an artist, I wanted to document them. I saw similar houses in Fort Kochi, too. One day they will vanish. In Jaffna, I did 30 drawings of these houses.”

Jasmine has experience of abandoned houses. When she was five years old, because of the civil war, the family moved to Vavuniya where she and her family spent three years in a refugee camp. “There were times when we were hungry,” she says. “Money was tight. My father no longer had an income.” Later, the family was able to build a house with the support of the government.

From young, Jasmine was interested in the arts. “As a child, I was fascinated by colours,” she says. So, when she grew older and told her parents she wanted to become an artist, unusually, they agreed. It helped that she was the youngest of two sisters and a brother. So Jasmine was able to do her Bachelor of Fine Arts from the University of Jaffna in 2010. Thereafter, she embarked on her career as an artist.

In 2017, she held an exhibition called ‘Fences’ at Colombo. Throughout her life, she saw fences, made of barbed wires and palmyra leaves, everywhere. “There are cultural and physical fences,” she says. “Whenever I saw a fence I would ask myself, ‘Why do we build fences? Even if two people are best friends, they are separated by a fence. Why is there a barrier?’ When you go through a street in Jaffna, you can see a lot of fences.”

But the fences between the Sinhalese and the Tamils seem to be disintegrating.

“There are a lot of things we have in common,” she says. “When I travel to Colombo, on the train, there are a lot of Sinhala passengers. We sit together and chat about many things. A lot of Sinhalese and Tamil artists are working together. In the universities, classes consist of both Tamil and Sinhalese students. In Sri Lanka today, both the communities are trying to understand each other. People are slowly coming together.”

(The New Indian Express, Kochi and Thiruvananthapuram)
at March 11, 2020