Wanted: organs to save lives 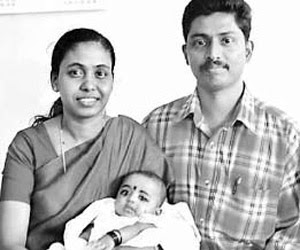 An organisation in Kochi tries very hard to promote organ transplants, but the public is indifferent

Photo: Joseph Varghese with his wife and a baby born one year after the kidney transplant

On January 27, 2009, a 72-year old woman died in Kochi. A few months earlier, she, along with her 78-year-old husband, had pledged their bodies for medical research with the Society for Organ Retrieval and Transplantation (SORT). Following the death, the body was taken away.

The next day when SORT Joint Secretary A. Vasanth Shenoy went to pay a courtesy call, the daughter said, “Since my mother died first, her wish was fulfilled. If it had been the other way around, my relatives would not have allowed it. My mother would have been unable to oppose them.”

This is one of the major problems that SORT had faced ever since its inception in 2000.

”There is an indifferent attitude on the part of the public,” says Shenoy. “Even though there is an awareness of transplantation, people do not want to donate the organs. If you ask for the reasons they will remain silent.”

Shenoy says that even in cases where a person has expressed his desire that his organs be donated after his death, the relatives will not fulfill the wish. “As a result, SORT has averaged one transplant per year in the past three years,” he says.

When you consider that 25 lakh people in India need urgent organ transplants, the situation is alarming. There are about 1 one lakh brain-dead patients in India every year, but less than 100 organ transplants to take place.

Incidentally, organ transplants can only be done on brain-dead people. Which means that the person is kept alive with the help of a ventilator.

In western countries, once a person becomes brain dead, the body comes under the control of the government, which ensures that the vital organs are taken from the body for transplantation.

“Our government should adopt the same method,” says Shenoy. “Unless pressure is put, families will not allow transplants to take place.”

SORT did its first transplant on July 27, 2004, when a sixty-two-year-old man, Ramachandran Nair, became brain-dead. Immediately, his son, a doctor based in the US, said he was willing to donate the organs of his father. “Do you have the expertise, the infrastructure and the recipients,” he said.

Thankfully, the Amrita Institute of Medical Sciences is well equipped and the transplant took place. The recipient for the liver was a Ramdas of Anandapuram, in Thrissur who was suffering from cirrhosis.

One kidney was given to Hemalatha from Paravur and the other to Joseph Varghese from Alleppey. The operation on Joseph was done at PVSM hospital. Both are leading healthy lives at present. However, Ramdas passed away three years ago because of an infection.

In 2007, K. Sidique, 21, received a kidney transplant at Lakeshore hospital, thanks to SORT. “I feel perfectly fine,” he says. “I just have to go for regular check ups. And have medicines.”

The monthly medical bill is Rs 12,000 but it is less than the Rs 30,000 Sidique had to pay for the thrice-weekly dialysis he had to do before he got his replacement kidney.

“I am grateful to SORT for doing the transplant for free,” he says. “I wish that the government subsidises our medical expenses. It is a financial burden on my family.”

The organs that are usually transplanted are the kidneys and the liver. But in western countries about 12 different organs are transplanted and they include the pancreas, eyes, skin, bones, intestines, tendons, heart valves and veins.

However, any transplant is an expensive procedure. In Kerala, for a liver transplant, it costs about Rs 8 lakh. “Sadly, it is beyond the reach of the common man,” says Shenoy.

So, are there any dangers of a recipient having psychological changes when a heart or a liver is transplanted?

Gary Schwartz, a professor of psychology at the University of Arizona, says that in 70 cases of people who got organ transplants, he noticed they had inherited the personalities of their donors. Schwartz gives an example of a health-conscious woman who craved fast food and became aggressive. She had received the heart and lungs of a young biker.

The professor said he knew of a seven-year-old girl who had nightmares of being killed. Investigations revealed that she had been given the heart of a girl who had been murdered.

“It is an ethical question,” says Schwartz. “Transplant patients should be told there is a possibility that they will take on a donor's characteristics. I don't want to frighten people, but to make it more acceptable so that they are able to share what is happening to them.”

However, most scientists have rejected this notion. Says Dr. John Schroder of the Stanford Medical Centre: "The idea that transplanting organs transfers life experiences is unimaginable."

Apart from psychological changes, recipients have physical side effects. Says Dr. Georgy K. Nainan, president of the Nephrology Association of Kerala: “An organ transplant is not a bed of roses. Sometimes, the body rejects it. All kinds of infections can come up: urinary, respiratory, bacterial, viral and tuberculosis.”

He says the way to tackle it is to use newer and efficient immunosuppressive medications. “Ideally, infections should be detected early and treated aggressively.”

But, thanks to SORT, at least, the sufferers are able to get the much-needed organs. All operations through SORT are done free of cost, and there are other philanthropic organisations like the Cochin Kidney Foundation who help defray the expenses of poor recipients.

It is now up to us, the public, to render all possible help so that more and more transplants can take place.